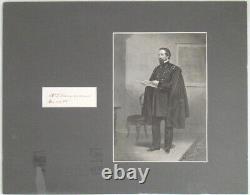 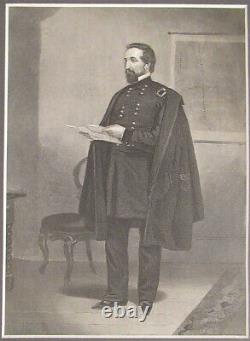 Civil War General William S. Rosecrans fought mostly successful battles during the Civil War, seeing action at the Battle of Rich Mountain, Iuka, Carnifex Ferry, Second Battle of Corinth, and Stones River. He brilliantly defeated Confederate General Braxton Bragg in the Tullahoma Campaign, but was humiliatingly defeated during the Battle of Chickamauga due to a poorly-worded missive. Aside from his lengthy military career, Rosecrans was an inventor, a coal-oil company executive, a diplomat, and politician. He was briefly considered as Lincoln's Vice Presidential running mate, but was ultimately passed over for Andrew Johnson. Matted with a 19th c. Portrait engraving of Rosecrans to: 11" x 14". Mat window for autograph: 1" x 3". The mat has some residue/damage, verso of card has mounting residue. Autograph is in very good condition with a neat, bold signature. A note about packing: Check our feedback. We take pride in our excellent packing.

We double-box all fragile items to insure their safe journey through the postal system. We do not mark merchandise values below value or mark items as "gifts" - US and International government regulations prohibit such behavior. This item is in the category "Collectibles\Autographs\Historical". The seller is "dholz" and is located in this country: US.

This item can be shipped worldwide.
majorunionultimatebattleautographmemoirsjosephwilliamconfederategettysburgsignaturephotographulysses1860srobertantiquegeorgeeditiongeneralgrantsignedjohnletterautographedrarejamesoriginalarmylincolnamericanshermangeneralsprintcivilphoto