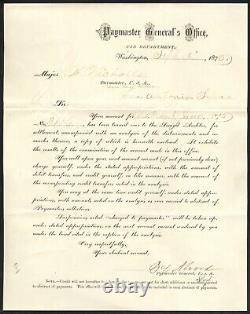 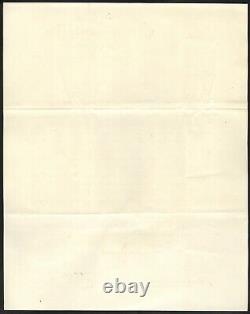 1875 Paymaster General's Document - Brig. Offered for your consideration is an official government paymaster document regarding the settlement of an outstanding account. It was issued from the " Paymaster General's Office ", part of the " (WAR DEPARTMENT,) ", and was dated from " Washington, " on Sept. It was addressed to Major W. Gibson / San Antonio, Texas.

It states (in part) that Your account for Apr. May & June, 1875 No. 3106, has been turned over to the Second Auditor, for settlement, accompanied with an analysis of the disbursements and remarks thereon.

You will upon your next account current (if not previously done) charge yourself, under the stated appropriations, with the amount of debt transfers, and credit yourself, in like manner, with the amount of the corresponding credit transfer.. The recipient is also told that. You may at the same time credit yourself. With amounts noted on the analysis as over carried to abstract of Paymasters collections. Suspensions noted'charged to paymaster' will be taken up.

On the next account current rendered by you.. It is boldly signed at the conclusion by " Benj Alvord " in his capacity as Paymaster General, U.

The back of the document is blank. A rather mundane document, signed by a long-serving United States Army officer (albeit, predominantly a paper pushing officer). Was born in Rutland, Vermont on August 18, 1813. He entered the United States Military Academy at West Point in 1829 (at the ripe old age of 16) and graduated with the class of 1833.

He served as an officer with the 4. United States Infantry for the next twenty-one years, except for two years when he served as an instructor at his alma mater.

He was present with his unit during the Seminole War, and at Palo Alto, Reseca de la Palma, and in the advance on Mexico City during the Mexican War. He was breveted major for his service in the latter operation, and after garrison duty in the early 1850's, was advanced to the full rank of major when he accepted an appointment as paymaster. He served as chief paymaster of the Department of Oregon from 1854 until 1862, when, on April 15, 1862, he was appointed a brigadier general of volunteers and placed in command of the newly created District of Oregon.

He remained in this position until March, 1865, with most of his effort being spent in mediating with the local native peoples. He resigned his volunteer commission in August, 1865, and the following month became paymaster at New York City.

He subsequently served as the chief paymaster at Omaha, chief paymaster of the Department of the Platte, and paymaster general of the United States Army after 1872. He was promoted brigadier general in the Regular Army in 1876, and retired in 1880. Benjamin Alvord died in Washington, D. On October 16, 1884 and was buried in the Evergreen Cemetery in Rutland, Vermont.

The presently offered document exhibits signs of period use, followed by reasonable long-term storage. Light toning is noted across the entire surface, imparting to the paper an off-white to beige hue. Darker spots can be seen at the edges, undoubtedly the result of the oils in our hands being deposited upon the paper. Several folds are present, though due to the type of paper used, these have not caused any separations at this time. The contrast is somewhat light throughout, except for Alvord's signature at the conclusion (though light, all of the manuscript material is legible).

Measuring approximately 8 x 10 inches, this document would look nice framed with a portrait of Alvord, or with a display of period currency. If you have any questions regarding this item, please ask before purchasing. He has contributed to numerous reference books within the industry, as well as being a co-author of The Comprehensive Catalog and History of Confederate Bonds, 2.

He is an authorized submitter to NGC, PCGS, and PMG, a diamond founding member of Coin Dealers Helping Coin Dealers and a supporter of the Industry Council for Tangible Assets. American Coins and Collectibles can be found at many of the state and local coin shows. This item is in the category "Collectibles\Militaria\Civil War (1861-65)\Original Period Items\Documents". The seller is "coin4u" and is located in this country: US. This item can be shipped to United States.