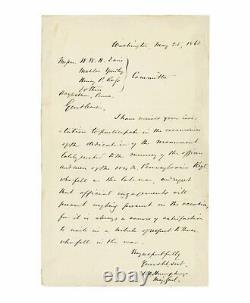 An interesting 1868 ALS by Andrew A. Humphreys, a career United States Army officer, civil engineer, and a Union General. He served in senior positions in the Army of the Potomac, including division command, chief of staff to General George G.

The General, who continued serving in the Army after the war, had been invited to attend the dedication of a monument to the 104th Pennsylvania Volunteers in Doylestown, Pennsylvania. He sent his regrets to the men of the organizing committee, including the regiment's original colonel, William W. " The letter was written on one side of an unlined sheet of paper measuring 5 3/4" x 9 1/4. It is in very good condition with light toning and creases where originally folded. I have received your invitation to participate in the ceremonies of the dedication of the monument lately erected to the memory of the officers and men of the 104th Pennsylvania Regt.

Who fell in the late war, and regret that official engagements will prevent my being present on the occasion, for it is always a source of satisfaction to unite in a tribute of respect to those who fell in the war. Please see my other items for more interesting Civil War letters, documents, and images.