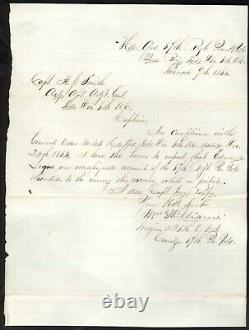 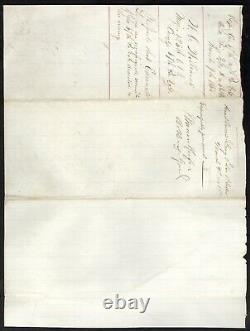 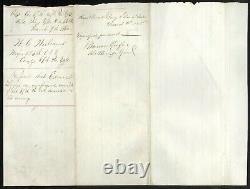 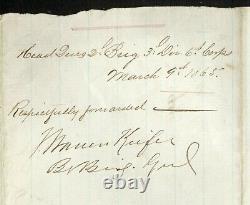 1865 Manuscript Document re: Deserted Soldier. Offered for your consideration is a manuscript document reporting the desertion of an individual from the Union Army, signed on the verso by Brevet Brigadier General Joseph Warren Keifer. 1865 ", this document is addressed to " Capt.

The body of the document states that In compliance in the General Order No 43 Hd. 1864, I have the honor to report that Edward Logue an unassigned recruit of the 67.

Deserted to the enemy this morning while on picket. It is signed Your Obdt. Williams " in his capacity as " Major, 126. The verso bears the expected filing information, including the unit involved, the name of the commanding officer, and a synopsis of the contents (this information would have been on the outside when the document was filed). A second section indicates that the document was also sent to Head Qurs 2. 1865 " and was " Respectfully forwarded _______. This section is signed at the conclusion by " J Warren Keifer ", at the time a " Bt Brig Genl " (Brevet Brigadier General). The document is accomplished in period ink on light blue-lined white paper, apparently torn from some type of ledger (the left edge is very ragged). An interesting document regarding a Union soldier who deserted only one month before the surrender of Confederate General Robert E. Lee's Army of Northern Virginia (one wonders why he would desert when the Union forces were in such a strong position at that particular time - the result of getting caught was generally not pleasant). Further research may uncover the subsequent lives of the lesser parties mentioned on this document.

Enlisted as a private on December 29, 1864, and was mustered in as a substitute into Company G, 67. Pennsylvania Volunteer Infantry the same day. He is listed in the records as deserting on March 9, 1865 (as noted in the presently offered document). Was 23 years old (he was born in London, England in 1838) when he enlisted on October 11, 1862 as a 2.

Lieutenant, and was mustered into Company K, 126. Ohio Volunteer Infantry the same day. He was promoted to 1.

Williams died on November 11, 1922 in Oxford, Ohio and was subsequently buried in Spring Grove Cemetery in Cincinnati, Ohio. Was born in Bethel Township, Clark County, Ohio on January 30, 1836. He attended Antioch College before returning to his family farm, and in his spare time began studying law. He opened a law practice in Springfield, Ohio on January 12, 1858.

He enlisted and was commissioned as a major in the 3. Ohio Volunteer Infantry (3 Months) on April 27, 1861, being mustered out on June 12, 1861. He was immediately commissioned with the same rank into the 3. Ohio Volunteer Infantry (3 Years), seeing action at the battles of Rich Mountain and Cheat Mountain. He was promoted to lieutenant colonel on February 12, 1862, and was discharged for promotion to colonel of the 110.

On December 12, 1864, President Lincoln nominated Keifer for appointment as brevet brigadier general of volunteers to rank from October 19, 1864, duly confirmed on February 14, 1865. With the return of the 6. Corps to the Army of the Potomac, Keifer participated in the Petersburg and Appomattox campaigns, for which he was brevetted to the rank of major general of volunteers on April 9, 1865. In 1873, he became a trustee of Antioch College, serving in that capacity until his death.

After the war, he served as the first commander in chief of the United Spanish War Veterans from 1900 to 1901, and as Ohio commander of the Loyal Legion in 1903 and 1904. Joseph Warren Keifer died on April 22, 1932 in Springfield, Ohio, and was buried in that city's Ferncliff Cemetery. The presently offered document exhibits signs of expected period use, followed by numerous years of less than ideal storage.

Toning is noted across the entire surface, imparting an off-white to beige hue to the paper. This toning is significantly more pronounced at the edges and along the storage folds, particularly on the mostly blank back. Moderate soiling can be seen on the top half of the back, corresponding to the sections which would have been the outside of the document when it was folded for storage. Numerous folds and creases are present, with the three horizontal storage folds somewhat adversely affecting the integrity of the paper (small separations can be found at the edges - easily strengthened with archival tape).

The contrast is average for the period, with all text and signatures fully legible. As noted earlier, it appears that this sheet was torn from a book or ledger, with the left edge being quite ragged (no text damaged). The remaining three edges exhibit signs of use, with some irregularities due to that use. Minor ink corrosion is mentioned for accuracy, as no paper has been lost or seriously affected. Measuring approximately 7¾ x 10? Inches, this piece would make a great addition to any Civil War generals or general Civil War collection. If you have any questions regarding this item, please ask before purchasing.

He has contributed to numerous reference books within the industry, as well as being a co-author of The Comprehensive Catalog and History of Confederate Bonds, 2. He is an authorized submitter to NGC, PCGS, and PMG, a diamond founding member of Coin Dealers Helping Coin Dealers and a supporter of the Industry Council for Tangible Assets. American Coins and Collectibles can be found at many of the state and local coin shows. This item is in the category "Collectibles\Militaria\Civil War (1861-65)\Original Period Items\Documents". The seller is "coin4u" and is located in this country: US.