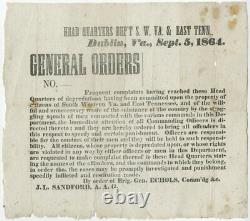 A Confederate General Warns His Commanders Not to Harass the Locals. Foraging during wartime often pits an army against its supporters in the civilian population. In his final month of departmental command before returning to the Army of Northern Virginia, Confederate Brigadier General John Nichols warning his soldiers not to molest citizens or their property. Dublin [Virginia], September 5, 1864.

12 x 10 ½ in. Frequent complaints having reached these Head Quarters of depredations having been committed upon the property of citizens of South Western Va. And East Tennessee, and of the willful and unnecessary waste of the substance of the country by the straggling squads of men connected with the various command in this Department, the immediate attention of all Commanding Officers is directed thereto; and they are hereby ordered to bring all offenders in this respect to speedy and certain punishment. Officers are responsible for the conduct of their men and they will be held to such responsibility. All citizens, whose property is depredated upon, or whose rights are violated in any way by either the officers or men in this Department, are requested to make complaint thereof to the Head Quarters, stating the names of the offenders, and the commands to which they belong, in order that the cases may be promptly investigated and punishment speedily inflicted and restitution made.

Virginia Infantry, which fought under Stonewall Jackson at the First Battle of Bull Run. He was wounded during the Valley Campaign and promoted to brigadier general. He then commanded a brigade in Western Virginia, eventually serving as the Departments commander.

He served on a three-man board investigating the fall of Vicksburg. Lee in the Army of Northern Virginia, Echols took over command of the Department of South Western Virginia and Eastern Tennessee in 1864. Scattered foxing; folds separating in places, minor edge paper loss.

Historic Documents and Legacy Collections. For over 20 years, Seth Kaller has been one of the countrys largest buyers of important historic documents and artifacts.

More than 10,000 rare manuscripts, documents, maps, and books handled by Kaller are now in institutional and private collections including working drafts of the United States Constitution, Lincoln-signed copies of the 13th Amendment and Emancipation Proclamation, and rare prints and broadsides of the Declaration of Independence. Kaller is a member of the Antiquarian Booksellers Association of America (ABAA), the Professional Autograph Dealers Association (PADA), the American Antiquarian Society, the Manuscript Society, the New-York Historical Societys Chairmans Council, and the Papers of Abraham Lincoln Advisory Board. Everything we sell comes with our absolute guarantee that it is original and authentic. Whether youre interested in the Founding Fathers, Documents of Freedom, Battles and Leaders, the Civil War, African-Americana, World History, Science, or a particular hero or villain, we can help you explore opportunities to take ownership of history.

We can coordinate every aspect of the process for you, from searching for individual items to building entire world-class collections for your home, business, foundation, or favorite museum. Build a legacy by preserving history for generations to come. Through donations and loans to your favorite museum, library, or university, you ensure the survival of these important documents and act as a steward for personalities and ideas that shaped the world.

The item "1864 Civil War Broadside Confederate General Orders Warning not to Harass Locals" is in sale since Thursday, April 2, 2020. This item is in the category "Collectibles\Militaria\Civil War (1861-65)\Original Period Items\Other Civil War Original Items". The seller is "sethkaller" and is located in White Plains, New York. This item can be shipped to United States.