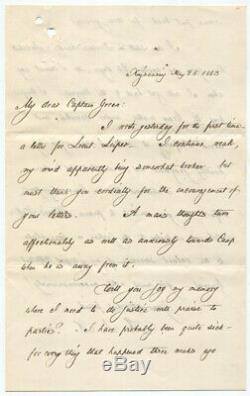 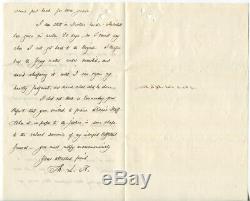 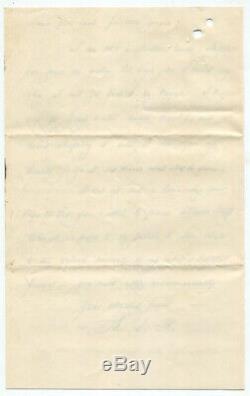 Civil War General Thomas Kane wrote and signed this brief letter in pencil on May 14, 1863 to Captain Green thanking him for sending a report on the Battle of Chancellorsville. At the time of this letter, Kane was fighting his own battle with pneumonia, a result of his horse having fallen into the Rapidan River during the Chancellorsville Campaign, which is why he says he is continuing feeble. He was influential in aiding the Mormons' settlement in Utah, and became a close friend to Brigham Young and an advocate for Utah statehood in the process. He served with the 13th Pennsylvania Reserve Regiment, also known as the Pennsylvania Bucktails, and the 12th Corps of the Army of the Potomac during the US Civil War, and was brevetted as a Major General for valor at Gettysburg.

John Pugh Green, born in 1839, was also a lawyer and then served as Captain and Assistant Adjutant General under General Kane with the Bucktails. In 1865, he began a career with the railroads, eventually retiring as a vice-president of the Pennsylvania Railroad.

John Pugh Green penciled in asterisks and a notation indicating the mentioned report was for the Battle of Chancellorville. Written on one side of a sheet of paper that measures 8 x 5 when folded. Condition: Fold lines, several file puncture marks at upper left corner not affecting text, otherwise very good condition. A note about packing: Check our feedback. We take pride in our excellent packing.

We double-box all fragile items to insure their safe journey through the postal system. We do not mark merchandise values below value or mark items as "gifts" - US and International government regulations prohibit such behavior. The item "1863 Civil War General Thomas Kane Gets a Chancellorsville Battle Report" is in sale since Friday, May 3, 2019. This item is in the category "Collectibles\Autographs\Military". The seller is "dholz" and is located in Cohoes, New York. This item can be shipped worldwide.