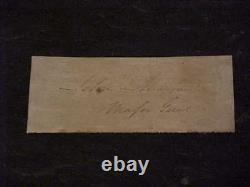 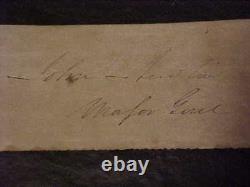 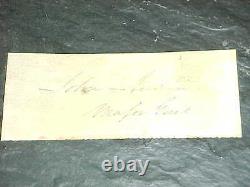 1800s Union General John Newton Autographed Signed Cut Civil War Engineer, measures 1 1/2" x 4". (August 25, 1822 May 1, 1895) was a career engineer officer in the. He ranked second in the. Class of 1842 and was commissioned in the Corps of Engineers. He taught engineering at the Military Academy (184346) and constructed fortifications along the Atlantic coast and Great Lakes (184652).

He was a member of a special Gulf Coast defense board (1856) and Chief Engineer. Though a fellow Virginian, Newton did not follow Robert E. But stood firm for the Union.

Newton helped construct Washington defenses and led a brigade in the Peninsula Campaign. He led a bayonet charge that resulted in taking the enemy position, and also fought at the Battle of Antietam.

As a division commander in the VI Corps. He participated in the Battle of Fredericksburg. After that disastrous defeat, he and other generals journeyed to see President. And informed him of their lack of confidence in Army of the Potomac. This was one of the causes of Burnside's relief in January 1863, but it also wounded Newton's career; his appointment to major general.

On March 30, 1863, was withdrawn the following year when his involvement was understood. Newton was wounded at Salem Church. He replaced the slain Maj. In command of the I Corps. And led it through the defense of Pickett's Charge. He retained command of I Corps until the Army of the Potomac was reorganized in 1864 for Lt. The I Corps was dissolved, and Newton was sent to the Army of the Cumberland.

He commanded the 2nd Division, IV Corps. He served under Sherman, who regarded him highly. At the Battle of Peachtree Creek.

He prevented a dangerous Confederate. Movement against Sherman and his rapidly constructed works allowed him to turn back the Confederate thrust, a victory that put his official military career back on track.

After the capture of Atlanta, Newton left active field duty and commanded the District of Key West and the Tortugas of the Department of the Gulf from 1864 to 1866. His last campaign resulted in a defeat at the Battle of Natural Bridge. In Florida in March 1865, which temporarily enabled the Confederates to hold on to the state capital. Returning to the Corps of Engineers, Newton oversaw improvements to the waterways around New York City.

And to the Hudson River. He also had charge of New York Harbor defenses until he was appointed Chief of Engineers. He is famed for blowing up New York's Hell Gate. Rock with 140 tons of dynamite on October 10, 1885. He retired from the Army in 1886 and served as Commissioner of Public Works, New York City (188688), and as President of the Panama Railroad Company. He died in New York City and is buried at West Point National Cemetery. In 1899, the Corps of Engineers named a 175-foot paddlewheeler in Newton's honor; the boat was later used as the Minnesota Centennial Showboat. Until its destruction by fire in 2000. The item "1800s Union General John Newton Autographed Signed Cut Civil War Engineer" is in sale since Friday, January 29, 2016. This item is in the category "Sports Mem, Cards & Fan Shop\Vintage Sports Memorabilia\Publications\Programs\Other Vintage Sports Programs".