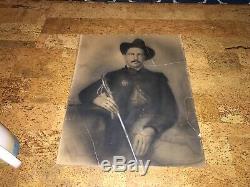 Please see pictures for condition. William Henry Harman (February 17, 1828 March 2, 1865) was a brigadier general in the Virginia militia and colonel in the Confederate States Army during the American Civil War (Civil War).

Prior to the war, Harman had served as a second lieutenant in the 1st Virginia Infantry Regiment during the MexicanAmerican War, after which he had become a lawyer. He was commonwealth's attorney for Augusta County, Virginia from 1851 until the beginning of the Civil War, when he was appointed a brigadier general in the state militia. As a brigadier general, Harman commanded part of the militia force that seized the Harper's Ferry Armory and Arsenal near the beginning of the war on April 18, 1861. He served as lieutenant colonel of the 5th Virginia Infantry Regiment of the Stonewall Brigade from May 7, 1861 to April 1862, when he failed to be appointed colonel in the April 1862 reorganization of the Confederate Army. Harman next served briefly as an aide-de-camp to Brigadier General Edward Johnson in Jackson's Valley Campaign, after which he was appointed an assistant adjutant general on February 19, 1864.

He commanded a regiment of reservists at the Battle of Piedmont on June 5, 1864. Harman was killed in action while commanding a regiment of reservists during the Battle of Waynesboro, Virginia, the town where he was born, on March 2, 1865. We have a large number of Civil War, Spanish war, and other historic items that will be listed this year from an amazing collection put together over many years. The item "William Henry Harman 13th brigade Virginia confederate general Civil War CDV" is in sale since Friday, March 29, 2019.