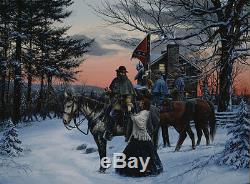 Few artists in the field have gained such widespread popularity so quickly. His art, prints and posters are now acclaimed among collectors, who prize his studies of Lee, Jackson, Forrest and other Civil War leaders, as well as his scenes of conflict and pageantry. His distinctive artistic style, which combines bright colors and contrasting shadows, and his devotion to historic authenticity have dramatically increased his popularity. Today, his original art is displayed throughout America and among collectors of fine art limited-edition Civil War prints. Artist John Paul Strain has become an American favorite. "The Parting " John Paul Strain S/N Limited Executive Canvas Giclee. Winter of 1862-63 Not even the biting cold of a Virginia winter could cool the affection shared by General A.

Hill and his wife, Kitty Morgan Hill. Theirs was one of the war's great love stories.

As commander of "Hill's Light Division" in Jackson's Corps of Lee's Army of Northern Virginia, Hill could rarely leave the army, but Kitty tried to follow her husband. They enjoyed a marriage of devotion, faith and friendship which produced four daughters. Kitty Morgan McClung married Hill in 1859, when the general was a lowly lieutenant in the U. Kitty was the sister of the famous Kentucky cavalry commander and raider John Hunt Morgan.

They settled in Washington, where they became a popular couple in the capital's social circle. Their marriage, a daughter later recalled, was an ideal one. But America's bloodiest war lay just ahead, and many of the army officers who were their friends in Washington would soon be made into enemies by the winds of war. In March of 1861, Hill resigned from the U. Army and accepted a Confederate colonel's commission in the 13th Virginia Infantry.

He was soon promoted to brigadier general and distinguished himself at the Battle of Winchester. He rapidly acquired rank and position, rising from brigadier to lieutenant general in little more than a year. In the winter of 1862-63, following the Battle of Fredericksburg, the couple enjoyed fleeting moments together near the Virginia front.

Despite the hardship of war and the demands of command, their relationship remained strong. As a soldier, Hill realized that any day in war could his last. A final parting would come eventually -- on a warm day in early spring near the war's end.

Until then, however, they rejoice in occasional reunions, treasured time together, until the moment came for another parting. All Limited Edition prints are signed and numbered (S/N) by the artist and include a Certificate of Authenticity.

The subject of the remarque is usually determined by the artist. Each remarque is a piece of original art which adds to the value of the print by making that particular print unique and exclusive from the rest of the prints in the edition. All Limited Edition artwork is subject to availability at time of order. The item "The Parting John Paul Strain Civil War Canvas General A. Hill and His Wife" is in sale since Saturday, January 21, 2012.

This item is in the category "Art\Art Prints". The seller is "airplanesandmore" and is located in Flower Mound, Texas. This item can be shipped worldwide.
williamgeorgeunionbattlegrantultimateeditionrarerobertletterphotographsignaturejohnmajorjosephautographamericanautographedgettysburgshermanulyssesmemoirsprintarmyphotogeneralssignedciviljamesgeneraloriginal1860santiqueconfederatelincoln