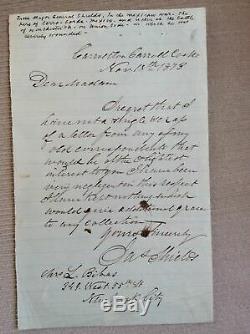 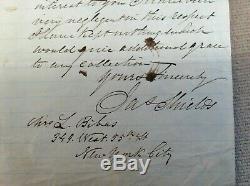 Up for sale is a signed letter from 1873 from James Shields. He was a Union General who inflicted the only tactical defeat of Stonewall Jackson during the American Civil War (Kernstown - part of the Valley Campaign in the Shenandoah).

He is also known as nearly having a duel with a young Abraham Lincoln, going so far as to meet on a remote island with their seconds. The letter is to a Mrs. Shields sends his regrets that he has not kept any letters from his old military colleagues which might be of interest to a collector, and signs boldly at the conclusion in black ink. Letter shows folds, a contemporary biographical inscription in black ink at top edge, a ink spots likely left by Shields while writing the letter.

James Shields (May 10, 1806 June 1, 1879) was an Irish American Democratic politician and United States Army officer, who is the only person in U. History to serve as a Senator for three different states. Shields represented Illinois from 1849 to 1855, in the 31st, 32nd, and 33rd Congresses, Minnesota from 1858 to 1859, in the 35th Congress, and Missouri in 1879, in the 45th Congress. Born and initially educated in Ireland, Shields emigrated to the Americas in 1826.

He was briefly a sailor, and spent time in Quebec, before settling in Kaskaskia, Illinois, where he studied and practiced law. In 1836, he was elected to the Illinois House of Representatives, and later as State Auditor. His work as auditor was criticized by a young Abraham Lincoln, who (with his then fiancée, Mary Todd) published a series of inflammatory pseudonymous letters in a local paper. Shields challenged Lincoln to a duel, and the two nearly fought on September 22, 1842, before making peace, and eventually becoming friends. In 1845, Shields was appointed to the Illinois Supreme Court, from which he resigned to become Commissioner of the U. At the outbreak of the MexicanAmerican War, he left the Land Office to take an appointment as brigadier general of volunteers. He served with distinction and was twice wounded. In 1848, Shields was appointed to and confirmed by the Senate as the first governor of the Oregon Territory, which he declined. After serving as Senator from Illinois, he moved to Minnesota and there founded the town of Shieldsville.

He was then elected as Senator from Minnesota. He served in the American Civil War, and at the Battle of Kernstown, his troops inflicted the only tactical defeat of Stonewall Jackson in the war. Shields resigned his commission shortly thereafter. After moving multiple times, Shields settled in Missouri, and served again for three months in the Senate. He died in 1879, and represents Illinois in the National Statuary Hall.

A fantastic item for the collector of historical or military autographs! (Inventory: Autograph Closet Envelope 9). The item "Signed Letter Civil War General JAMES SHIELDS Duel with Abraham Lincoln" is in sale since Monday, January 20, 2020. This item is in the category "Collectibles\Militaria\Civil War (1861-65)\Original Period Items\Other Civil War Original Items". The seller is "ron-likes-history" and is located in Glenmoore, Pennsylvania.