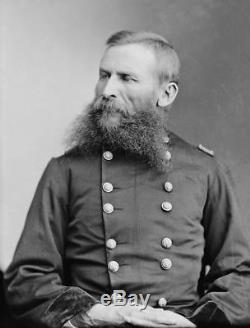 We offer for sale this one-of-kind May 1855 service record of 2nd Lieutenant George Crook, endorsed by 2nd Lieutenant John B. During the American Civil War, both of these soldiers went on to become distinguished Generals - - in the Confederate States Army C. , and the Army of the Potomac respectively.

This document is in excellent condition. And the association of these two officers in this single signed monthly personnel record is unique since these two men ended up fighting on opposite sides during the Civil War. (The photographs of these Generals are for identification purpose only, and are not part of the sale). Background history of this Monthly Service Record for May 1855 - In the late spring of 1855, when the snow started to thaw in the Oregon Territory, the War Department ordered an engineering expedition to identify possible railroad routes. Lieutenant Horatio Gibson, commanded the escort team of which Lieutenant John Bell Hood commanded the cavalry, and Lieutenant George Crook was the commissary and quartermaster.

It was Crooks responsibility to feed not only the pack-train of engineers, doctors, and others on the expedition, but also almost 100 soldiers that were needed since Indians previously had attacked early similar undertakings. George Crook was a graduate of West Point in 1852, and John Bell Hood graduated in the class of 1853. Both had the dubious distinction of finishing their studies near the very bottom of their respective classes. The careers of these two men. George Crook was born in Ohio, and served for several years in the Infantry in the Northwest and in California.

In 1861, when the Civil War began, Crook began his service in the 36th Ohio Infantry in Western Virginia. He was wounded in a small fight in Lewisburg, and he was in the Second Battle of Bull Run. At the Battle of Antietam, he led his brigade near Burnside Bridge. By September 1862, he was promoted to the rank of Brigadier General. Throughout the Civil War, Crook distinguished himself in numerous battles in Southwestern Virginia and the Shenandoah Valley, and commanded a cavalry division in the Army of the Potomac during the Appomattox Campaign. After the Civil War, Crook had a distinguished service record in the Indian Wars, including the Great Sioux War, the Apache Wars, and Geronimo War. In the last years of his life, he spoke out against the unjust treatment of his former Native American adversaries. Crook died in Chicago in 1890.

John Bell Hood had the distinction of being one of the most rapidly promoted soldiers in the history of the C. Born in Kentucky, Hood, resigned his commission in the U. Military to join the South as a Cavalry Captain in April of 1861.

He fought in such early campaigns as the Second Battle at Manassas and the Battle of Gaines Mill (First Battle of Cold Harbor or sometimes called the Battle of the Chickahominy River). After this battle, where he. Led his brigade in a charge that broke the Union line, he was promoted to major general in 1862. He fought at Sharpsburg and Fredericksburg, and most importantly he was a courageous officer at the Battle of Gettysburg, where he was severely wounded in the left arm, combatting Union forces, at Devils Den. Undaunted as a military leader, he also lost his right leg about 4 inches below his hip at the Battle of Chickamauga. As Lieutenant General, Hood conducted the remainder of the Atlanta Campaign, where, in the summer of 1864, he launched four major offensives in an attempt to break General Shermans siege of Atlanta. After sustaining significant casualties, Hood evacuated the city of Atlanta, destroying as many military supplies and installations as possible, as the Union Army marched to the sea. Toward the end of the war, Hood led his army to battles in Tennessee, and at the end of the war, he surrendered to Union forces in Mississippi. Hood died of yellow fever in 1879. This is a wonderful opportunity to obtain in a single document the association of two Generals who fought for the North and the South One of the most unique items that.

We have offered for sale for the discriminating Civil War collector. We always describe all items for sale carefully and as accurately as possible, and provide the necessary photos to clarify condition issues. Our photographs are an important part of the items description. We do not use stock photographs; instead all photographs are of the actual item listed for sale. All domestic mailings are sent through the U.

We never used flimsy US Postal Service boxes or mailers. Sorry, we do not accept international orders. The item "Signed Document Confederate John Bell Hood Union General George Crook Civil War" is in sale since Thursday, March 28, 2019. This item is in the category "Collectibles\Militaria\Civil War (1861-65)\Other Civil War-Related Items". The seller is "presidentsboxbookshop" and is located in Washington, District Of Columbia. This item can be shipped to United States.