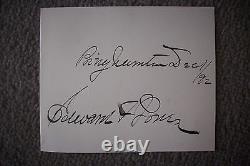 He was a Union soldier in the Civil War. He served in the 6th Massachusetts Regiment, finishing the war as a Brevet Brigadier General. He became a politician and was Lieutenant Governor of New York from 1886 to 1891. He might be most famous for his march through Baltimore in April, 1861 which sparked the first bloodshed of the Civil War. The signature is on a piece of paper.

It is in very good condition. Above his signature he wrote Binghamton Dec 1/92. (He lived for a time in binghamtoon, NY and passed away there). He was the son of Lorenzo B. Jones and Sophronia (Chapman) Jones.

He was educated at Leicester, Massachusetts. In 1850, he married Mary A. In 1854, he joined the militia as a Lieutenant.

In 1861 he joined the 6th Massachusetts Infantry as a Major, and he was soon named commander with the rank of Colonel. He led the organization on its famed march through Baltimore, which sparked the first bloodshed of the American Civil War.

His troops traveled onward and helped with the defense of Washington, D. Jones later recruited and commanded the 26th Massachusetts Infantry. On February 24, 1866, [1] President Andrew Johnson nominated Jones for the grade of brevet brigadier general, United States Volunteers, to rank from March 13, 1865, for meritorious services during the war. Senate confirmed the award on April 10, 1866. In 1862, he married Susan Annie Brown, from Boston.

In 1865, he served in the Massachusetts House of Representatives. Soon afterwards, he moved to Binghamton, New York, where he opened a scale manufacturing plant. Jones served as Binghamton's Police Commissioner, was a Regent of the University of the State of New York, served as President of the State Board of Equalization, and served on the boards of numerous colleges and charities.

He was the Lieutenant Governor of New York from 1886 to 1891, elected on the Democratic ticket with Governor David B. Hill in 1885 and 1888. In 1905, he published the novel Richard Baxter: A Story of New England Life of 1830 to 1840. Jones continued to operate his business until he lost his sight at the age of 79, after which his scale works was operated by his son.

He was buried at Mount Auburn Cemetery in Cambridge, Massachusetts. His home at Binghamton, known as the Gen. Jones House, was listed on the National Register of Historic Places in 1982. A fantastic item for the collector of historical, political or military autographs! Also, a wonderful idea for a family member to add to their archives!

This item is in the category "Collectibles\Autographs\Military". The seller is "ron-likes-history" and is located in this country: US. This item can be shipped worldwide.