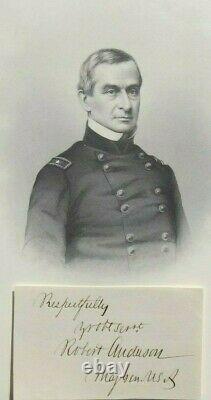 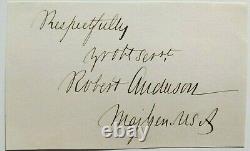 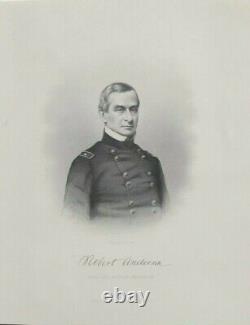 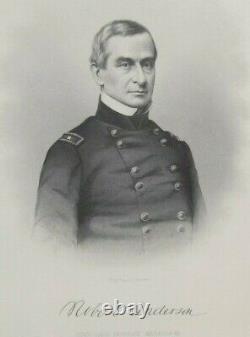 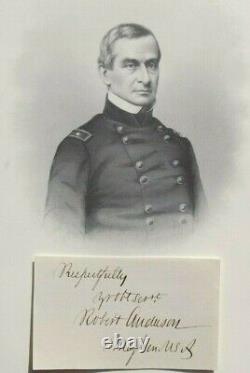 Robert Anderson [1805 1871] was a United States Army officer who began his military career in 1825 and was a veteran of the Black Hawk War, the Second Seminole War, and the Mexican American War but he is historically remembered for his role during the American Civil War. General Anderson was the Union commander in the first battle of the American Civil War at Fort Sumter in 1861.

In November of 1860 Anderson was assigned to command of U. Forces in and around Charleston, South Carolina.

When South Carolina seceded from the Union Anderson remained loyal to the Union, despite being a native of Kentucky. General Anderson moved his small garrison to Fort Sumter in the middle of Charleston Harbor. On April 12, 1861, under the orders of Confederate president Jefferson Davis to capture the fort, a artillery attack began under the command of General P.

General Anderson was badly outnumbered and outgunned and was forced to surrender his command on April 14, 1861. The autograph is signed''Respectfully your obt.

Servt Robert Anderson Maj Gen. The page measure 3.25 x 2.00 inches, it has trivial toning otherwise it is in fine condition and will be accompanied with a quality engraving which is perfect for display with the autograph. The autograph is authentic, rare to. And this is a desirable example of this historically noted United States Army commander and will be a desirable addition to any Civil War collection.

All sales will be accompanied with our Certificate of. And we also offer a.

Check out my other items. Be sure to add me to your favorites list. This item is in the category "Collectibles\Autographs\Military".