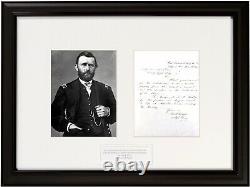 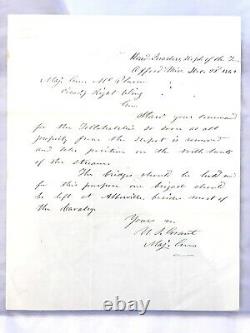 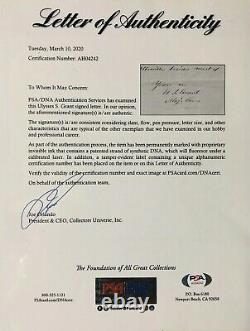 GRANT SIGNED 1862 Letter Civil War Battle Plans PSA. In battle there comes a time when both sides consider themselves beaten, then he who continues the attack wins. Hes been called the greatest General of his time. Hiram Ulysses Grant was born on April 27, 1822, in Point Pleasant, Ohio. Grant was Shy and reserved in his youth like his mother.

When Grant was 17, his father arranged for him to enter the United States Military Academy at West Point. A clerical error had listed him as Ulysses S. Not wanting to be rejected by the school, he changed his name on the spot. In 1854, Grant resigned from the Army but in 1861, Confederate troops attacked Fort Sumter in Charleston Harbor, South Carolina.

This act of rebellion sparked Grant's patriotism and put him in the front lines of the U. Grant was appointed to command an unruly 21st Illinois volunteer regiment. Grant and his volunteers took the small town of Paducah, Kentucky, at the mouth of the Tennessee River.

In February 1862, in a joint operation with the U. Navy, Grant's ground forces applied pressure on Fort Henry and Fort Donelson, taking them both. These battles are credited as the earliest significant Union victories of the War and Grant was promoted to Major General. Grant continued to win Battles including the Battle of Shiloh in 1862, the Battle at Vicksburg in 1863.

Grant adamantly believed that taking down the Confederate armies was most important and set out to track down and destroy General Robert E. Grant hunted for Lee in the forests of Virginia, all the while inflicting unsustainable casualties on Lee's army. On April 9, 1865, Lee surrendered his army to Grant, marking the end of the Civil War. This extraordinary war time letter addressed to Major General James McPherson, Containing important military content and battle plans reads, Start your command for the Tallahatchie so soon as all property from the Depot is removed and take position in the North banks of the stream. The bridges should be held and for this purpose one brigade should be left at Abbeville, besides most of the Cavalry.

Hand written and signed in Grants own hand, Ulysses S. Weve included this impressive photo of Grant in uniform and centered below it the perfect quote from Grant. One that embodied his warrior mindset and one that speaks to and high achievers tenacity.

All of this is beautifully framed in our hand built, contemporary, wide frame, enhanced with professional white matting. As with all of our works, every piece is original. Only the highest quality materials have been used in the assembly of this item.

Sourced from the best manufacturers around the world, we build every frame tailored specifically for the item it will hold. Protected with 99% UV museum quality glass, and carefully crafted with acid free paper whenever possible. Our premium wood moldings are cut using the newest technology and every single piece is assembled and inspected by our team here in Los Angeles.

All autographs have been authenticated by third party experts from the top authenticators in the country, and notarized certificates of authenticity are included in a black leather portfolio. Copies of the original authentications are kept on file with Billionaire Collectibles and can be retrieved by the original purchaser. We stand 100% behind all of our works of art, and offer a lifetime guarantee on every piece, for as long as you own it. The item "Rare GENERAL ULYSSES S.

GRANT SIGNED 1862 Letter Civil War Battle Plans PSA" is in sale since Friday, October 29, 2021. This item is in the category "Collectibles\Militaria\Civil War (1861-65)\Original Period Items\Other Civil War Original Items". The seller is "billionairecollectibles" and is located in Pacific Palisades, California. This item can be shipped to United States.