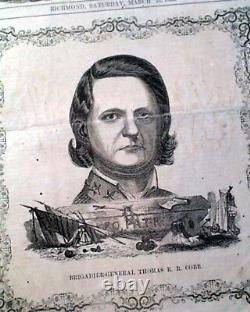 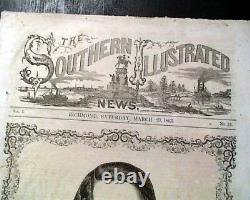 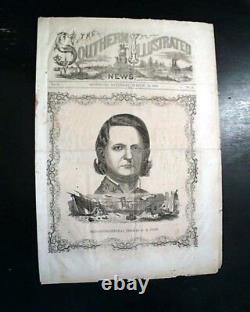 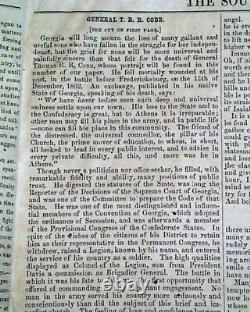 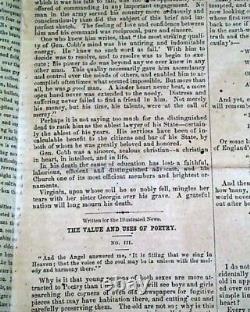 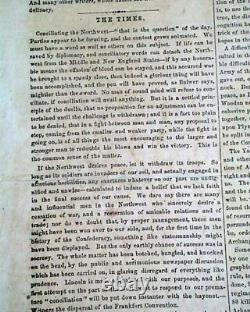 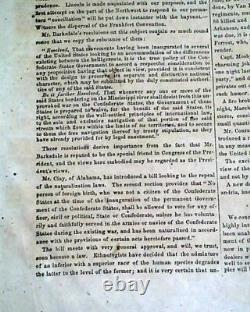 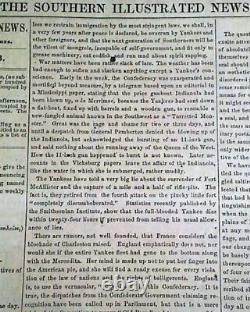 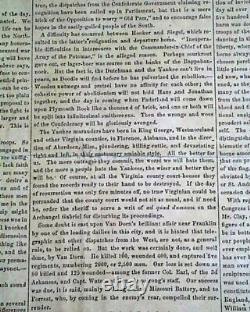 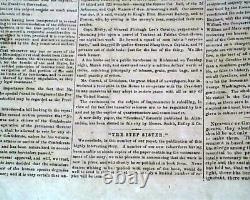 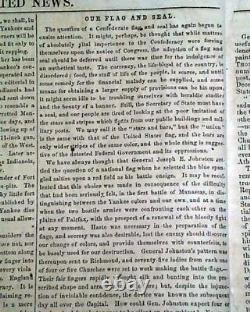 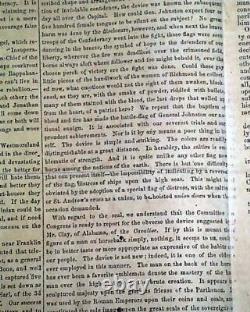 Offered is an original, historic, & collectible old newspaper: SOUTHERN ILLUSTRATED NEWS, Richmond, March 21, 1863. General Thomas Reade Rootes Cobb. A very rare publication from the Confederacy, as relatively few issues have come into our inventory over the past 42 years. Although much of the content was literary in nature, there are news reports and a few illustrations. The front page is entirely taken up by a print of: Brigadier-General Thomas R.

Page 2 has an article headed: "The Times" which takes 1 1/2 columns and includes the latest accounts of the Civil War, a few items including. The Yankees have told a very big lie about the surrender of Fort McAllister & the capture of a mile & a half of rifle pits. The fact is they retired from the fourth attack on the plucky little fort'completely discumboborated'.

Statistics recently published by the Smithsonian Institute show that the full-blooded Yankee dies within 24 hour if prevented from telling his usual allowance of lies... A difficulty has occurred between Hooker & Siegel which resulted in the latter's resignation & departure home... Plundering, killing cattle & devastating right & left in their customary amiable style.

All the better for us. The more outrages they commit, the worse we will hate them, & the more a people hate the Yankees the wiser & better they will be... Mosby of General Fithugh Lee's Cavalry perpetrated a charming joke upon a parcel of Yankees at Fairfax Court House... Page 2 also has a lengthy article: "Our Flag and Seal" which not only describe them but offers much more (see). Also: "Necessity of General Intelligence" and the next page has a biography of: General T.

Cosbv whose print is on the front page. Much of the balance of the issue is taken up with literary items, including a poem titled: "Fredericksburg" (see) Begun on September 13, 1862 the "Southern Illustrated News" sought to fill the void left when the Southern States lost access to Harper's Weekly and other illustrated newspapers from the North. In its "Salutatory, " in the first issue the editors state.

We propose to issue an Illustrated Family Newspaper. Devoted to literature, to public instruction and amusement, to general news, and to the cause of our country in this trying hour when she is engaged in a terrible, but resolute and hopeful struggle for her liberty and independence...

Although it could be argued it never lived up to all of these goals as reports from the war were very limited, it was an important publication nonetheless. At its peak boasting as many subscribers as the largest daily paper in Richmond.

The engravings were crude when compared to Yankee publications. Eight pages, never-trimmed margins, some pg. 2 glue at the spine edge is close to text, generally very nice condition. Please Note: All of our offerings are 100% authentic! We do not offer reprints or reproductions of any kind.

They are guaranteed to be original! For this specific item, A U. The per-item additional cost for folders, portfolios, and presentation cases vary. We will still provide tracking and insure them at our expense. Please check with your country's.

We have been dealers in rare newspapers for over 43 years, serve as consultants to multiple museums, and are members of the American Antiquarian Society. Timothy Hughes Rare Newspapers P. Desiring to conduct ourselves honorably in all things.

Were it left to me to decide whether we should have a government without newspapers, or newspapers without a government, I should not hesitate a moment to prefer the latter. The item "RARE General Cobb CONFEDERATE Illustrated Civil War RICHMOND VA 1863 Newspaper" is in sale since Tuesday, January 29, 2019. This item is in the category "Collectibles\Militaria\Civil War (1861-65)\Original Period Items\Other Civil War Original Items".

The seller is "timhu" and is located in Williamsport, Pennsylvania. This item can be shipped worldwide.