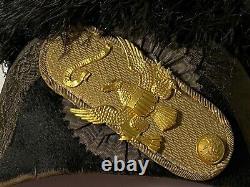 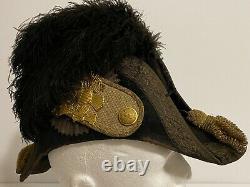 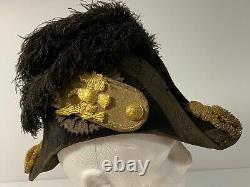 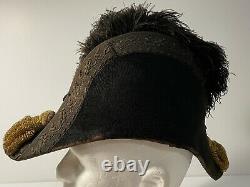 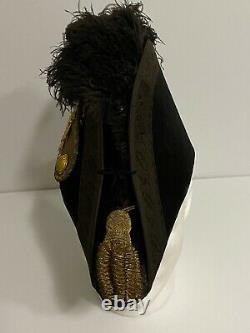 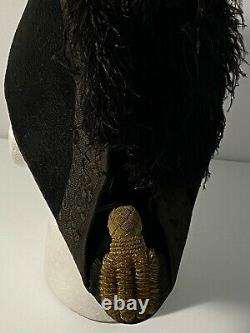 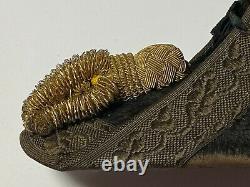 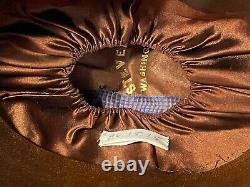 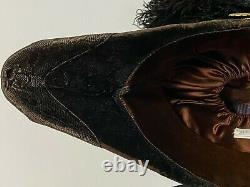 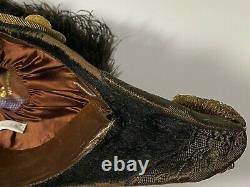 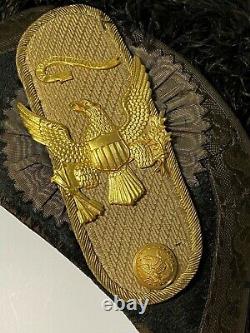 PRE-CIVIL WAR, GENERAL OFFICER, M1859, CHAPEAU De BRAS, WITH PROVENANCE. This is a great example of a General Officers Chapeau de Bras worn for dress and ceremonial occasions. Made by Stevens, Washington and so embossed in gold on the brown silk lining. The black beaver fur is generally in fine condition with some wear to the fur along the front and rear sections, where it received the most wear. The three black ostrich feathers are in very good condition.

Overall condition is Museum quality. The chapeau de bras is only rarely seen in Civil War images, but was a regulation optional headgear.

The regulations stated that a light French chapeau was optional for generals, staff officers and chaplains. The chapeau evolved from the tricorn hat of the Revolutionary era. In the case of the chapeau or "bicorn" the front and back were cocked up and an ornamental cockade and strap with eagle were displayed in the front.

Chapeau came to be worn in a "fore and aft" style rather than the side-to-side "athwart" style of Napoleon. Chapeaux de bras continued as a dress item into the Twentieth Century and was not given up by the Navy until 1940. This is a seldom seen General Officers Chapeau de Bras coming back into the collectors market and is now available for those advanced collections. Note: Chapeau de Bras from this time period can be found, however not in this condition, and not for General Officers.

Overall : 18 1/4 in x 9 in x 2 in; 46.355 cm x 22.86 cm x 5.08 cm. Due to the rarity of this item, it will be packaged for its protection, and will be double boxed. This General Officers Chapeau de Bras is marked 86.15.15. This number represents the catalog number from the Gettysburg Civil War Library and Museum, Philadelphia, Pennsylvania, which has since closed its doors.

The Gettysburg Civil War Library and Museum curatorial worksheet dated 5/10/05 will be included with this General Officers Chapeau de Bras. The Museum was housed at 18th and Pine Streets in Philadelphia from 1922 until 2008, when it closed in anticipation of building a new museum in Philadelphia. Since 2010 the collection has been cared for by the Gettysburg Foundation and stored at the Gettysburg Battlefield Museum and Visitors Center, where artifacts have been exhibited in the main galleries and in the special exhibition for the 150th anniversary of the Battle of Gettysburg. In 1886, several Companions of MOLLUS (Military Order of the Loyal Legion of the United States) began the formation of a Civil War Library and Museum to serve as a repository for their records, relics, memorabilia, souvenirs, artifacts, and awards.

A charter and Certificate of Incorporation were granted on May 2, 1888 for the War Library and Museum of the Military Order of the Loyal Legion of the United States. Hayes, 19th President of the United States, was its first President. The Museum closed in 2008. The collection is the result of over a century of acquisition and conservation of a full range of artifacts, documentary material, books, and memorabilia of the Civil War.

The Civil War Museum of Philadelphia was chartered in 1888, but the Museums history and its collection had their beginnings as the Civil War ended in 1865. A group of Union officers in Philadelphia came together after the assassination of Abraham Lincoln, fearing that the War might start again.

When that concern was allayed, these officers served as the honor guard for President Lincolns body as it lay in state in Independence Hall. They soon determined that they could commemorate the sacrifices and service of Union officers by forming an organization, the Military Order of the Loyal Legion of the United States [MOLLUS]. With headquarters in Philadelphia, commanderies were established in the states that supported the Union during the War. The collection was created, for the most part, as a result of contributions of MOLLUS members, their families, and the leading citizens of the time. Hayes was the first President of what was then called the War Library and Museum. This provenance means that the personal stories, as well as, the war stories of these men can be told through the uniforms, diaries, weapons and other belongings in the collection. A bullet-struck pocket watch and bloody handkerchief tell as powerful a tale of the experience of battle, as the rifle and bayonet; a scrapbook with a letter from home and a lock of hair, as meaningful as a flag tattered by battle. The item "PRE-CIVIL WAR, GENERAL OFFICER, M1859, CHAPEAU De BRAS, WITH PROVENANCE, RARE" is in sale since Wednesday, December 1, 2021. This item is in the category "Collectibles\Militaria\Civil War (1861-65)\Original Period Items\Uniforms". The seller is "bayern-landhaus" and is located in Fort Knox, Kentucky. This item can be shipped to United States.