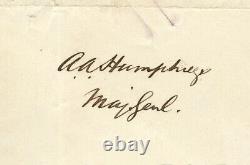 Humphreys - 1865 Government Check Signed. Offered for your consideration is a government check, issued in late 1865, probably as a re-imbursement for sundry funds expended, signed on the back by an officer whose military career spanned over fifty years.

The check was drawn on " THE FIRST NATIONAL BANK OF PHILADELPHIA " in " Philadelphia " on November 20. 186 5 " and instructs the recipient to " PAY TO Maj Genl A A. It is boldly signed at the conclusion by " Henry Bowman " in his capacity as Capt & A. (Captain and Assistant Quarter Master).

A vignette at the left features a representation of the coat of arms of the city of Philadelphia, with " DESIGNATED DEPOSITORY / OF THE UNITED STATES " printed above and No. Below, both statements obviously referring to the bank. The amount is repeated in numerical format near the lower border. The back of the check was originally blank, though it now bears the endorsement of A.

The check was printed in reddish-pink ink by Wm. , as evidenced by his imprint near the lower border on the front.

A pencil notation reading " 289.79 " can be seen beside Bowman's signature, the exact nature of which is unknown. An interesting and attractive item signed by two active Civil War officers.

This piece would look great framed with period illustrations of both officers, or as a wonderful addition to any Union generals autograph collection. Was born on September 9, 1834 in Lancaster, Worcester County, Massachusetts. He was working as a book-keeper when he was mustered into the service as a captain in the 15.

Massachusetts Volunteer Infantry on August 1, 1861. Newspaper reports indicate that he was captured at the battle of Ball's Bluff, Virginia. Bowman was mustered out of the 15.

Massachusetts Infantry on August 6, 1862 to become major of the 34. Sources indicate that he served until his resignation and discharge on July 27, 1863. From February 29, 1864, Bowman apparently served as a captain and assistant quarter master in the United States Volunteers.

One source states that he was promoted to major in August, 1864, though on the presently offered document, dated after that time, he still gives his rank as captain. He was mustered out of the service on August 15, 1866, and sometime before 1880, he and his wife relocated to Colorado. Henry Bowman died on April 12, 1908 in Denver, Colorado and was subsequently buried in Woodlawn Cemetery in Clinton, Massachusetts. Was born on November 2, 1810 in Philadelphia, Pennsylvania. He graduated from Nazareth Hall (today's Moravian College & Theological Seminary), after which he entered the United States Military Academy at West Point.

He graduated on July 1, 1831, after which he joined the 2. United States Artillery at Fort Moultrie, South Carolina.

He served with his unit in the Seminole War, falling ill and becoming disgusted with the management of the war; he subsequently resigned on September 30, 1836. After two years as civil engineer in the United States service, Humphreys was re-appointed to the U. Lieutenant in the corps of Topographical Engineers. Re-instated to the Engineer Corps in 1844, Humphreys was put in charge of the Central Office of the Coast Survey. Promoted to captain in 1848, he was directed to commence surveys along the Mississippi River Delta in 1850, though from 1853-57 he also worked on the Pacific Railroad Surveys with the Secretary of War, Jefferson Davis. Soon after the outbreak of the war, Humphreys was promoted to major and chief topographical engineer in the Army of the Potomac. After initially assisting in the planning of the defenses of Washington, D. He joined General George McClellan for the Peninsula Campaign. Promoted to brigadier general of volunteers on April 28, 1862, he was given command of the 3. Division of the V Army Corps on September 12.

Held in reserve at the battle of Antietam, his unit advanced the farthest against the stone wall at Marye's Heights during the battle of Fredericksburg (he had two horses shot from under him and his clothes pierced numerous times). His men participated in the battle of Chancellorsville, after which he was put in command of the 2. Division of the III Army Corps and almost immediately sent into action at the battle of Gettysburg.

The corps was under the command of Major General Dan Sickles, who insubordinately moved his men forward, directly into the path of General James Longstreet's assault. Humphreys' three brigades were demolished in the attack by soldiers of Confederate Major General Lafayette McLaws' division. Since his division was destroyed at Gettysburg, Humphreys became chief of staff for the Army of the Potomac after his promotion to major general of volunteers on July 8, 1863.

He remained in that position until November, 1864, at which time he assumed command of the powerful II Corps. He remained in command of that storied unit until the close of the war. He was brevetted brigadier general in the regular army on March 13, 1865, and brevetted major general on May 26, 1865.

After the close of the war, Humphreys remained in the military, becoming a permanent brigadier general and Chief of Engineers in 1866. He retired from the service on June 30, 1879. Following his retirement, Humphreys authored two books about his Civil War service.

Humphreys died on December 27, 1883 in Washington, D. And was buried in that city's Congressional Cemetery.

The presently offered item exhibits signs of expected period use, followed by years of less than ideal storage. Toning is noted across the entire surface, imparting a beige to light tan hue to the paper. This toning is significantly more pronounced on the back and at the right edge, where the paper appears as a medium brown. Numerous storage folds, both horizontal and vertical, are noted, as are several diagonal creases at the left end. Several of these folds have weakened the integrity of the paper, though only small splits are present at the edges at this time.

Each of these folds affects some design element or manuscript addition, though due to the size, Humphreys' signature is just barely touched at the beginning. A relatively large "X" punch bank cancellation can be seen at the left, significantly affecting the vignette.

An additional cancellation, smaller and more ragged, can be seen at the upper right. The face of the document exhibits signs of uneven fading, while the signature on the back remains sharp and bold. The edges are slightly ragged and irregular, with a few short tears scattered throughout.

It appears that several lines of text were written on the back, though most of these have been erased and cannot be read. Measuring approximately 3¼ x 7? Inches, this piece would make a great addition to any Civil War officers collection. If you have any questions regarding this item, please ask before purchasing. He has contributed to numerous reference books within the industry, as well as being a co-author of The Comprehensive Catalog and History of Confederate Bonds, 2.

He is an authorized submitter to NGC, PCGS, and PMG, a diamond founding member of Coin Dealers Helping Coin Dealers and a supporter of the Industry Council for Tangible Assets. American Coins and Collectibles can be found at many of the state and local coin shows. This item is in the category "Collectibles\Militaria\Civil War (1861-65)\Original Period Items\Documents". The seller is "coin4u" and is located in this country: US. This item can be shipped to United States.