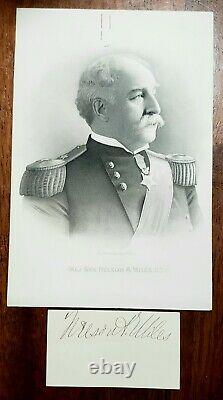 He oversaw Jefferson Davis while imprisoned after the war. He served in the West during the Indian Wars, he went north to fight Chief Joseph and then south to fight Geronimo, then back North again. 100% Authentic and guaranteed to pass PSA, JSA, or Beckett. This signature was pre-certified by PSA. Beautiful signature on an off-white paper the size of a business card.

It has remains of where a former collector had it mounted in a scrap book, not affecting the front or signature at all. He will still find a way to fight in the Spanish-American War. He was a true warrior and military man.

If you don't have him, you need him, any Civil War or Old West collector that doesn't have him would make a perfect gift for that person! Like I said, I guarantee they will pass the main three authenticators , PSA, JSA, or Beckett if you must. May 15, 1925 (aged 85) Washington, D. 22nd Regiment Massachusetts Volunteer Infantry.