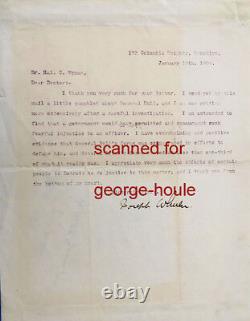 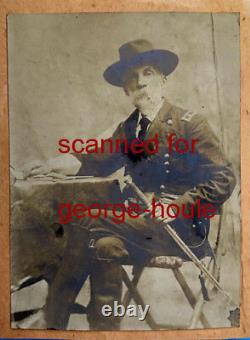 And positive evidence that General Hull's force was exaggerated in efforts to defame. Him, and General Brock's force stated at less than one-third of what it really was.

Appreciate very much the efforts of certain people in Detroit to do justice in this matter. And I thank you from the bottom of my heart. / Sincerely yours, Joseph Wheeler.

Together with a vintage photograph of General Wheeler in his Civil War uniform. Seated, his left hand grasping his saber. 3 1/2 x 5 inches.

It is glued down to old album leaf. Letter, light type, light creases. Photograph, light toning, old stains, crease. Joseph Wheeler was an American military commander and politician. He was a General in the.

Turn of the twentieth century. Known for his efforts to promote reconciliation between the North.

Served multiple terms as a United States Representative from the state of Alabama as a. Wheeler appeared in an early film, Surrender of General Toral (1898) - about William.

For which he was court-martialed, but later pardoned by President Madison. Born: 1836, Augusta, Georgia; died: 1906, New York City, New York. Houle Rare Books & Autographs P. Box 5704 - Smoke Tree Station Palm Springs, California 92263. BShipping charges may vary depending on weight, size, value, and destination. We do NOT use PAY PAL. We Guarantee Authenticity Of All Signed Items!

We Are Members of ABAA and PADA. This item is in the category "Collectibles\Autographs\Historical". The seller is "george-houle-books-autographs" and is located in this country: US. This item can be shipped to United States.