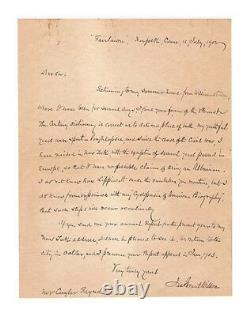 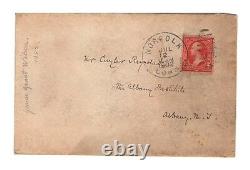 Fine piece for your collection! Good content Wilson letter to Cuyler Reynolds of the Albany Institute giving the history of where he lived, in Poughkeepsie before the Civil War and New York City after the exception of a few years in Europe. Soon after his birth, his family relocated to Poughkeepsie, New York. He was educated at College Hill, and then privately tutored.

He joined his father in business, later becoming his partner. In 1855, he began a two-year trip to Europe. And founded the Chicago Record, a journal of art and literature. He left the Army in 1865 and moved to New York City, where he became an author, speaker, and president of the Society of American Authors. In 1885 he also became president of the New York Genealogical and Biographical Society.

He edited several works of history and biography. Please note: I will gladly consider any serious, close offer. Please write with any questions. This item is in the category "Collectibles\Autographs\Historical".

The seller is "mediamarket101" and is located in this country: US. This item can be shipped to United States, all countries in Europe, China, Japan, Canada, Australia.