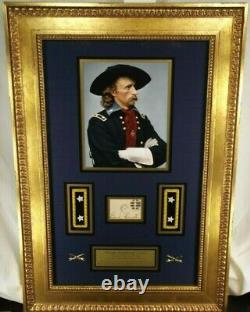 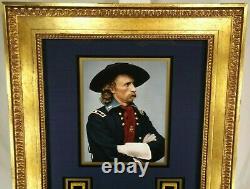 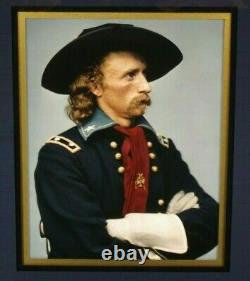 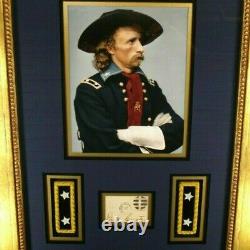 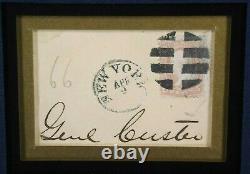 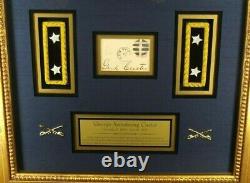 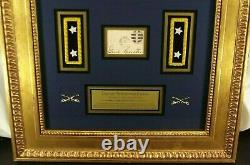 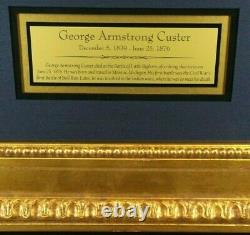 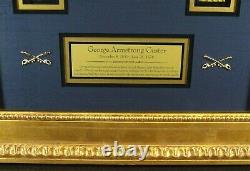 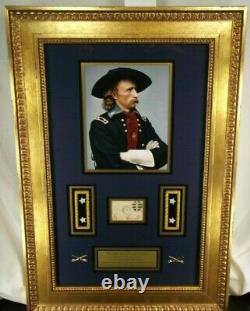 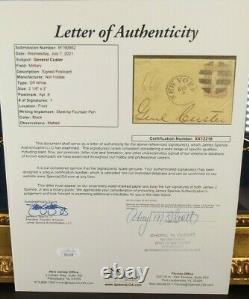 George Armstrong Custer [1839 1876] was a United States Army officer and cavalry commander in the American Civil War and the American Indian Wars. During the civil war Custer commanded at numerous engagements and major battles and was present at Lee's surrender to Grant at Appomattox. In 1866 Custer received an extended leave from the Army and explored employment options with the railroad, the mining industry and considered running for Congress in Michigan. On July 28, 1866, Custer was appointed lieutenant colonel of the newly created 7th Cavalry Regiment at Fort Riley, Kansas and commanded in numerous campaigns against various Indian tribes over the next 10 years. On June 22, 1876 Custer and his regiment located a large Indian encampment in a valley near Little Big Horn which contained fractions of Indians from various tribes which included Lakota, Cheyenne and Arapaho.

While an exact number of Indians is not known participants in the battle estimate between 2500 to 5000 Indians were present. Custer divided his command into three groups which consisted of approximately 700 men.

As the battle ensued Custer along with 274 solders were killed and 55 wounded. After the battle the public response varied in the immediate aftermath and Custer's widow Libbie Custer worked to protect her husbands reputation and during the following decades Custer and his troops came to be considered iconic and heroic figures in American history. The autograph is signed''Genl Custer'' in black dip pen and the cover is postmarked New York, April 9. The cover measures 5.25 x 3.00 inches with 3.25 x 2.00 inches displayed. The cover has trivial toning otherwise it is in fine condition and the autograph is bold, easily read and displays wonderfully.

The autograph has been authenticated by JSA Authentication Services and will be accompanied with the above Letter of Authenticity. The display is stunning and is centered around a striking colorized Civil War era formal military image [8.00 x 10.00 inches] of General George Custer. Mounted on both sides of the autograph is a pair of two star general's U. These are high quality reproductions which measure 3.50 x 1.75 inches. Mounted below is a professionally engrave metal plaque which reads as follows,''George Armstrong Custer December 5, 1839 - June 25, 1876.

George Armstrong Custer died at the Battle of Little Big Horn, after being shot twice on 25 June 1876. He was born and raised in Monroe, Michigan.

His first battle was the Civil War's first Battle of Bull Run. Later, he was involved in the Indian wars where he was to meet his death''. Mounted on both sides of the plaque is a pair [reproduction] of United States Army Cavalry Crossed Sabers. The display has been professionally assembled and triple matted in all acid free materials with great attention to detail as follows.

The outer matte is a blue linen which has been accented with a black and a gold inner matte. The display has been completed in a quality ornate gold wood frame to the dimensions of 29.00 x 20.00 inches. The display is stunning, museum quality, the autograph is a authenticated bold signature and is an outstanding example of this famous and historically noted United States Army commander. We have listed a collection of military, aviation and political autographs.

Be sure to add me to your favorites list. This item is in the category "Collectibles\Autographs\Military".

view" and is located in this country: US. This item can be shipped to United States.