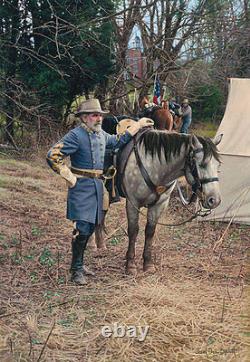 His early art, prints and posters depicting Civil War subjects produced the same enthusiastic response as his Western Art, and in the 1980s John Paul Strain began to concentrate on the Civil War. Few artists in the field have gained such widespread popularity so quickly. His art, prints and posters are now acclaimed among collectors, who prize his studies of Lee, Jackson, Forrest and other Civil War leaders, as well as his scenes of conflict and pageantry. His distinctive artistic style, which combines bright colors and contrasting shadows, and his devotion to historic authenticity have dramatically increased his popularity. Today, his original art is displayed throughout America and among collectors of fine art limited-edition Civil War prints.

On the evening of July 1st the weight of the world was on General Robert E. The decisions he would make over the next few days would decide the fate of the Confederacy and the future of the United States.

Lee commanded the Army of Northern Virginia consisting of 65,000 battle hardened troops. His army had won or fought to a draw every major battle against the Federal army up to that time. The war up to this point had been a disaster for President Lincoln and his administration.

With battle losses and the ever growing casualty lists, there was a growing movement in Washington for a negotiated peace. General Lee's assignment was to defeat or seriously damage the Federal Army of the Potomac and then threaten the city of Washington itself. At that point negotiations could begin for peace and independence for the Southern States. Earlier in the day lead elements of Lee's army under the command of General Heth, had run into Federal cavalry in and around the sleepy little town of Gettysburg. Federal infantry brigades and artillery began to engage. Heth sent forward two of his brigades under command of General Archer and General Davis. The force pushed back the Federals briefly until an even heavier force of Federals counter attacked and compelled them to retire. When General Lee arrived on the scene he found Heth's whole division in line of battle preparing to attack. Soon General Rodes's division of Ewell's corps arrived and deployed to the sound of the guns just at the right location and propitious time. Taking advantage of this good fortune, General Lee changed his mind about waiting for his main force under Longstreet to arrive and ordered his men forward.

The attack routed the Federals and they retreated back through the town and into the surrounding hills south and east of Gettysburg. The evening brought quiet and Longstreet and Lee surveyed the ground with field glasses. Lee sent orders to General Ewell to advance and take the high ground "if practicable, without committing the whole army to battle".

Ewell commanded Stonewall Jackson's old corps and decided not obey General Lee's order as his men needed rest. Longstreet continued his disagreement with Lee about how and where to fight. Longstreet wanted to shift the army to the left and find good high ground to defend, placing southern forces between Washington and the Federal army. Lee wanted to fight where he found the enemy.

"If the enemy is there, we must attack him" Lee replied. But Lee also had not received information as to the strength of the enemy force he was facing. He did not hold the high ground, and General Stuart and his cavalry were more than 75 miles away. Lee had within his grasp the fate of the nation.

If only he could wield his mighty army with all its moving parts and personalities, and make the right decisions as he had done so many times before. Also available in these formats.

Remarques on Artist Proof Giclee Paper Print Edition Only. All Limited Edition prints are signed and numbered (S/N) by the artist and include a Certificate of Authenticity.

Limited Edition prints are restricted to a certain number. For example, if 400 prints are made from an original painting, once theyre gone, thats it. There is no limit to the number of open edition prints of a particular painting. Thats why Limited Edition prints are more expensive and more valuable to collectors than "open" edition. Rare objects are more valuable. The term "giclee" denotes an elevation in printmaking technology. Images are generated from high resolution digital scans and printed with archival quality inks onto various substrates including canvas, fine art, and photo-base paper. The giclee printing process provides better color accuracy than other means of reproduction. The quality of the giclee print rivals traditional silver-halide and gelatin printing processes and is commonly found in museums, art galleries, and photographic galleries. An Artists Proof (AP), generally, is the first 10% of the Limited Edition prints that come off the press. If the Limited Edition is 400 s/n, there would be 40 APs. This status is noted on the print. Collectors prefer APs because their value increases even more than a Limited Edition as time goes by. A remarque is a drawing done in the white border area of an art print.

The subject of the remarque is usually determined by the artist. Each remarque is a piece of original art which adds to the value of the print by making that particular print unique and exclusive from the rest of the prints in the edition. All Limited Edition artwork is subject to availability at time of order.

The item "General Lee in Gettysburg John Paul Strain Studio Canvas Giclee" is in sale since Sunday, July 23, 2017. This item is in the category "Art\Art Prints".