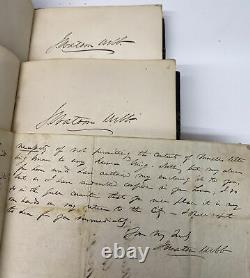 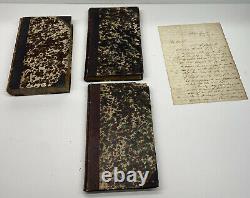 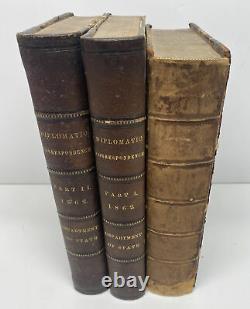 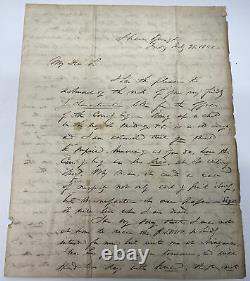 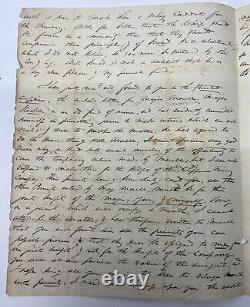 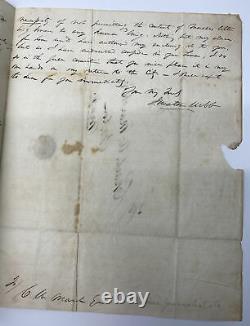 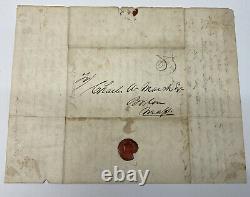 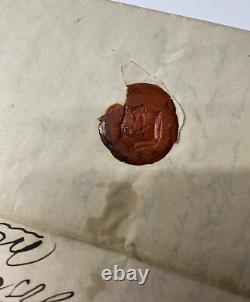 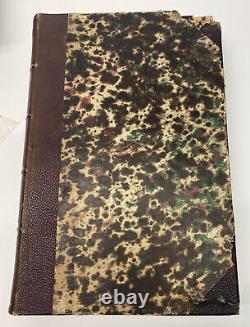 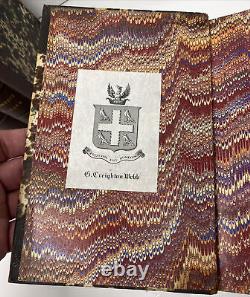 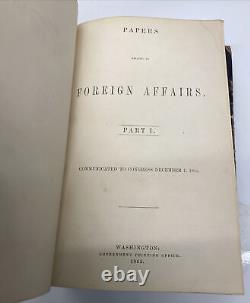 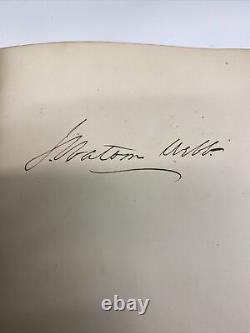 Communicated to congress December 1, 1862. Washington Government Printing Office 1862. The third inside page is hand signed by James Watson Webb himself.

The book itself is in good condition. The spine is clean and tight. It does have some rodent damage to the upper right front cover corner. Other than that, it's in very good condition overall. The second book is Papers Relating to Foreign Affairs Part II. The book itself is in very good condition. The third book is Papers Relating to Foreign Affairs, Accompanying the Annual Message of The President to the First Session of the Thirty-Eighth Congress Part II. Washington Government Printing Office 1864. This book has no signature, but it does have the personal library stamp of G. Creighton Webb along with the family Coat of Arms. He was the son of James Watson Webb. He was also a New York attorney and Yale Law School graduate.

This book is in poor/good condition, as both the front and back cover are split at the spine. Although, all is still intact because of the internal string binding.

Lastly, is a handwritten letter by James Watson Webb. The letter is dated July 31, 1845 from J. Watson Webb to Charles W.

Charles W March was an American author, writer for the New York Tribune and the New York Times. He was also a member of the State Legislature and was for some time American vice consul at Cairo.

He visited Gibraltar in the 1850s as part of a grand tour and published his experiences in Sketches and Adventures in Madeira, Portugal and the Andalucias of Spain in 1856. The letter itself is 2 1/4 pages in a folded letter. If you google James Watson Webb, you will find many interesting stories from his duels to politics. The Library of Congress also has a lot of interesting stories about him. The letter is hard to read.

The first page speaks of manufacturing paper. The second page talks about the Whig Party and a candidate for the primary. It also talks about his friend Major Morrell and getting him to obtain some type of permits. The last page says "of not permitting the contents of Morrell's letter being known to any human being".

It retains the original red wax Presidential Style Eagle Seal. The letter itself also comes with an unconditional lifetime Certificate of Authenticity from Randy Thern (Member of UACC, The Manuscript Society and ANA). The books themselves were obviously personally signed by James Watson Webb and personally owned by him therefore. ALL AUTOGRAPHS ARE GUARANTEED ORIGINAL FOR LIFE AND LISTING IS AS DESCRIBED. The son of Revolutionary War General Samuel Blatchley Webb, at age 12 he moved to Cooperstown to live with his brother-in-law and train as a store clerk.

Webb joined the Army as a Lieutenant in 1819 and served until 1827, when he became publisher of New York City's merged Morning Courier and Enquirer newspapers. Initially a supporter of Andrew Jackson, Webb later backed Henry Clay and coined the name "Whigs" for the new party that rose in opposition to Jackson's presidency. In 1849 Webb was appointed Minister to Austria, but since he had backed Zachary Taylor over Clay for the Whig presidential nomination, Clay led Senate opposition, and Webb was not confirmed. In 1851 he was appointed Chief Engineer on the staff of New York's Governor with the rank of Brigadier General.

At the start of the Civil War in 1861, by now a Republican, he declined both a commission as a Brigadier General in the Army and appointment as Minister to Turkey. He accepted the post of Minister to Brazil, a position in which he served until 1869. As Minister, Webb negotiated an agreement with his longtime acquaintance, French Emperor Napoleon III, that led to French withdrawal from Mexico and the reestablishment of Mexico's sovereign government. James Watson Webb was the father of Civil War General and Medal of Honor recipient Alexander Stewart Webb and railroad executives and philanthropists William Seward Webb and H. This item is in the category "Collectibles\Autographs\Historical".