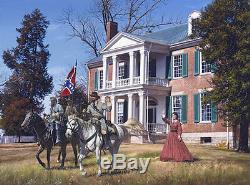 WE SUPPORT OUR TROOPS AND COUNTRY. THE ARTIST - JOHN PAUL STRAIN Artist John Paul Strain captures the color, drama and heroism of the Civil War with a vivid realism that is unique among the nation's top-ranking historical artists. A native Southerner born in Nashville, Tennessee, John Paul Strain has studied American History and the War Between the States in particular practically all of his life. He received his formal training at BYU, polished his professional techniques as an illustrator for the U. Department of Energy, and soon afterwards entered the field of historical fine art, prints and posters.

His work met immediate success and was showcased at a premiere gallery in the Rocky Mountains. Acclaimed for his paintings of the Old West, he eventually moved to Texas to work full time in the field of historical art. His early art, prints and posters depicting Civil War subjects produced the same enthusiastic response as his Western Art, and in the 1980s John Paul Strain began to concentrate on the Civil War. Few artists in the field have gained such widespread popularity so quickly.

His art, prints and posters are now acclaimed among collectors, who prize his studies of Lee, Jackson, Forrest and other Civil War leaders, as well as his scenes of conflict and pageantry. His distinctive artistic style, which combines bright colors and contrasting shadows, and his devotion to historic authenticity have dramatically increased his popularity.

During the latter part of the cold days of November 1864, General Hood's Confederate Army of Tennessee was challenging two retreating Federal Army corps under the command of General John M. With support from Nathan Bedford Forrest in command of the Southern cavalry, Hood's army outmaneuvered Schofield, and at Spring Hill had a chance to cut off the Federals from their retreat to Nashville.

Although Confederate forces outnumbered the Federals, Hood was unsure of the enemy's strength and did not give orders for a full-scale engagement. The Federals slipped past during the night and took refuge behind the fortifications in Franklin. As was his practice to make a thorough personal reconnaissance of the enemy's position, General Forrest arrived on the morning of November 30 at the Carnton plantation.

Forrest was greeted by the lady of the house Mrs. Bounding up the stairs of the beautiful home, the general went to the balcony to glass the enemy fortifications. It was clear from this observation post that the enemy was far too strong for an assault at this position. Mounting his horse, King Phillip, Forrest left the home in haste with his Adjutant General J. General Forrest turned his spurs to the south to find General Hood and report what he had found.

At one o'clock in the afternoon Forrest informed Hood that the Federal position could not be taken by a direct assault. General Hood replied I do not think the Federals will stand strong pressure from the front; the show of force they are making is a feint in order to hold me back from a more vigorous pursuit. " Forrest remarked, "General Hood if you will give me one strong division of infantry with my cavalry, I will agree to flank the Federals from their works within two hours' time. At four o'clock the gray lines got the given sign to move forward in a frontal attack. The rank and file of 18,000 men swept like a wave across the battlefield.

The attack was as spectacular and as hopeless as Pickett's charge. For 5 hours Hood sent wave after wave of southern boys to their deaths. The Carnton home served as field hospital for hundreds of dying and wounded soldiers. An officer wrote, the wounded, in the hundreds were brought to the house during the battle, and all the night after. And when the noble old house could hold no more, the yard was appropriated....

The next morning the bodies of four great Confederate Generals killed during the battle were brought to the home. Granbury, John Adams, and Otho F.

Strahl were placed in a row on the back porch. Many a brave man's spirit departed that autumn day at Carnton.

And many say their spirits have never left. Also available in these formats. Remarques on Lithographic Artist Proof Print Edition Only. All Limited Edition prints are signed and numbered (S/N) by the artist and include a Certificate of Authenticity.

If the Limited Edition is 400 s/n, there would be 40 APs. This status is noted on the print.

Collectors prefer APs because their value increases even more than a Limited Edition as time goes by. A remarque is a pencil drawing done in the white border area of an art print. The subject of the remarque is usually determined by the artist.