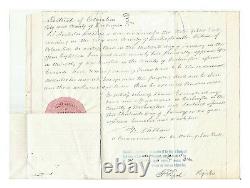 Franz Sigel German-American Union Civil War General Autograph Document! A nicely-signed, partially folded document (about 10 1/2" x 8 1/2")'F. 2, 1872 as Register of New York, certifying that Nicholas Callan is indeed a commissioner for New York although at the time he was living in Washington.

What a fine piece of Civil War History to add to your collection! He graduated from the Karlsruhe Military Academy in 1843, and was commissioned as a lieutenant in the Baden Army. He participated in the 1848 Revolution which spread throughout many of the small Germanic countries, and fled from Prussian suppression, eventually moving to New York. Shortly after the outbreak of the Civil War, Sigel became a colonel with the 3rd Missouri, where he fought under General Nathaniel Lyon.

He led his troops in skirmishes near Camp Jackson, in St. Louis, and in Carthage, Missouri, establishing Federal control of the area. On August 7, 1861, he was promoted to brigadier general, partly as a tool to help recruit German-Americans into the Union Army. His best leadership during the war came at the Battle of Pea Ridge in Arkansas, where his command of two divisions helped secure a Union victory. Following the Battle of Pea Ridge, Sigel fought unsuccessfully throughout the rest of the war.

He commanded during the Second Battle of Manassas, where the Union army was defeated, and remained in reserve at the battles of Fredericksburg and Antietam. He was defeated at the Battle of New Market, and resigned his commission on May 4, 1865.

Please note: This fine autographed document is in fine, VG condition. I will gladly consider any reasonable, close offers. Please write with any questions.

This item is in the category "Collectibles\Autographs\Historical". The seller is "mediamarket101" and is located in this country: US. This item can be shipped to United States, all countries in Europe, China, Japan, Canada, Australia.