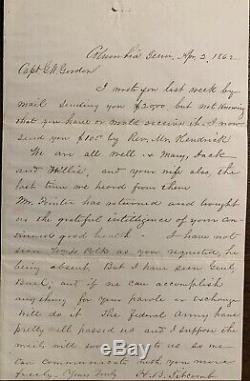 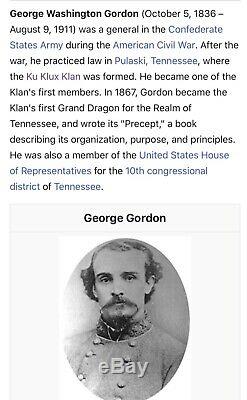 W Gordon POW Letter + Cover Civil War KKK Leader. This letter and cover is to Captain George Washington of the 11th Tennessee Infantry who would later become a Confederate General. He is a POW at the Chase Ohio Camp in April of 1862 after being captured in Tennessee during a skirmish.

He is later transferred to Johnson Island POW camp. The letter to to Gordon from Hiram Titcomb who is Gordons relative. Kendrick who I believe is a political prison at Camp Chase for not taking the Oath of Allegence to the Union.

Later after the war General Gordon would work with Bedford Forrest as one of the first starting members of the KKK. W Gordon would write the original Precept for the KKK.

He also was the first Grand Dragon of the Realm for Tennessee. I show a photo of General Gordon and Hiram Titcomb which are not included in this sale. The item "Confederate General G. W Gordon POW Camp Chase Letter Cover Civil War KKK Leader" is in sale since Friday, July 10, 2020. This item is in the category "Collectibles\Militaria\Civil War (1861-65)\Other Civil War-Related Items".