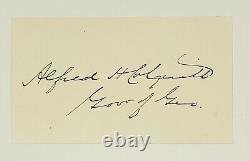 CONFEDERATE CSA GENERAL Alfred H. Colquitt Civil War Stonewall Jackson's Brigade for a period of time. At the beginning of the civil war, Colquitt was appointed captain in the 6th Georgia Infantry. Eventually rising to colonel, he led his regiment in the Peninsula Campaign. At Seven Pines, he assumed brigade command after Brig.

Gen Gabriel Rains was wounded, and led it through the Seven Days Battles. He led his brigade under Stonewall Jackson in the Battle of South Mountain, Battle of Antietam, the Battle of Fredericksburg, and the Battle of Chancellorsville. Colquitt survived Antietam unscathed although nearly every other officer in the brigade was killed or wounded.

After the battle, he was immediately promoted to brigadier general, to rank from September 1. Gen Junius Daniel's brigade.

His brigade was transferred again in the summer of 1863 to protect Charleston, South Carolina. In February 1864, Colquitt marched his brigade south to help defend against the Union invasion of Florida, and was victorious in the Battle of Olustee. After this battle, Colquitt's brigade rejoined Robert E. Lee's Army of Northern Virginia. A unique and perfect gift for a person that loves history. March 4, 1883 March 26, 1894. January 12, 1877 November 4, 1882.

This item is in the category "Collectibles\Autographs\Military". The seller is "totalarchives" and is located in Eagle, Idaho.