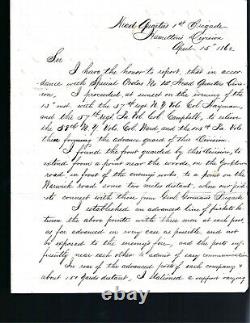 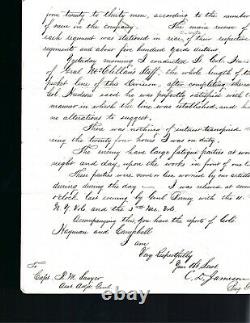 Condition as seen; Rare 1862 Union Document by Brigadier General Charles Jameson of Maine on the Penninsula describing movements and actions in 1862. Charles Davis Jameson (February 24, 1827 - November 6, 1862) was an American Civil War general and Democratic Party candidate for Governor of Maine. Jameson was born in Gorham, Maine, but his family moved to the lumbering and sawmilling center of Old Town, Maine when he was still a child. Jameson became a successful lumberman, and in 1860 was a delegate to the Democratic National Convention from Maine.

With the outbreak of war in 1861 he was elected Colonel commanding the 2nd Maine Volunteer Infantry Regiment, the first Maine unit to leave the state for the front. He led his regiment into the First Battle of Bull Run and was soon made Brigadier General of Volunteers.

In the months after Bull Run the Democratic Party of Maine split into anti-war and pro-war factions, and Jameson became the gubernatorial candidate of the "War Democrats". He lost the election to Republican Israel Washburn, Jr. From the neighboring town of Orono, but narrowly beat the anti-war Democrat, John W. In 1862, however, with the war going badly, Jameson was largely abandoned by Democratic voters when he ran again, though the anti-war Democratic candidate was narrowly defeated by Republican Abner Coburn. Later that year at the Battle of Fair Oaks, Jameson was wounded and subsequently disabled by "camp fever" (likely typhoid fever) and allowed to return to Maine.

He died in Old Town on November 6, 1862 and is buried at Riverside Cemetery in Stillwater, Maine. [2] Some sources report that Jameson actually died on the steamship carrying him home between Boston and Bangor. This item is in the category "Collectibles\Autographs\Military". The seller is "civil_war_photos" and is located in this country: US.