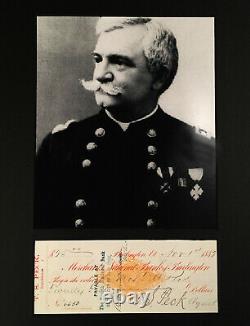 This listing is for a RARE Major General Theodore Peck, Civil War, Medal of Honor Recipient HAND SIGNED CHECK FROM 1882. This check was signed by Colonel Peck 137 years ago.

The autographed check has been mated with an unsigned in-uniform 8x10 inch photograph perfect for framing. BIO: Major General Theodore S. This check is 137 years old! I will also include an unsigned 8x10 photograph of Colonel Peck. The Medal of Honor is the highest military decoration awarded by the United States. It is awarded: for conspicuous gallantry and intrepidity at the risk of life, above and beyond the call of duty, in actual combat against an armed enemy force. Since it was first awarded during the Civil War, the medal has only been awarded 3,460 times. If you are not familiar with Colonel Peck accomplishments during the Civil War please read the following. Theodore Safford Peck was born in Burlington, March 22, 1843. He enlisted at the age of eighteen as private in Co. 1, 1861; mustered into United States service, Nov. 1, 1861; transferred to Co. K, and discharged for promotion, June 25, 1862; appointed, by Col. George Jerrison Stannard, regimental quartermaster-sergeant, 9th Regt. Infantry, June 25, 1862; promoted 2d lieutenant, Co. 7, 1863; promoted 1st lieutenant, Co. H, June 10, 1864; acting regimental quartermaster and adjutant, also acting assistant adjutant-general, aid-de-camp, and brigade quartermaster, 2d Brigade, 2d Division, 18th Army Corps; promoted captain and assistant quartermaster, United States Volunteers, March 11, 1865; assigned to 1st Brigade, 3d Division, 24th Army Corps. He served on the staffs of Brevet Maj. Ripley, in the trenches in front of Petersburg and Richmond, Va. In the Vermont cavalry he was present in action at Middletown and Winchester, Va. May 24 and 25, 1862; in the 9th Regt.

29, 1864; was present in New York City commanding a battalion, 9th Vt. In November, 1864, at the second election of President Lincoln. He was also present in the siege (winter, 1864, and spring, 1865) and capture of Richmond, Va. And was with the first organized command of infantry (3d Brigade, 3d Division, 24th Army Corps) to enter the confederate capital at the surrender on the morning of April 3, 1865; his brigade was also provost guard of the city for two weeks after its capture. 29, 1864, in the assault of Fort Harrison, Va.

He received a medal of honor inscribed as follows: The Congress to 1st Lieut. For gallantry in action at Newport Barracks, N. Captain Peck was mustered out of the United States service on account of the close of the war, June 23, 1865, having served nearly four years as a private in the ranks, an officer in the line and on the staff, a member of the cavalry corps and also of the 1st, 4th, 9th, 18th, and 24th army corps in the armies of the Potomac and the James. The government at the close of the war offered him two commissions in the regular army, which were declined.

Upon his return to Vermont he was appointed chief of staff, with rank of colonel, by Governor John W. Stewart; afterwards colonel of the first and only regiment of infantry of the state, which position he held for eight years. In 1869 appointed assistant adjutant-general of the G.

Department of Vermont, and by his energy and tact saved the order from going to pieces; in 1872, senior vice commander, and in 1876-'77 department commander. In 1881 he was appointed adjutant-general of Vermont, with rank of brigadier-general, and is on duty in this office at the present time. He is a charter member of the Vermont Commander Military Order of the Loyal Legion and was a vice president-general of the National Society, Sons of American Revolution. He had four ancestors in the Revolutionary war and one in the war of 1812.

General Peck was appointed by President Harrison a member of the board of visitors at the United States Military Academy at West Point in 1891. THIS IS AN AUTHENTIC HAND AUTOGRAPHED CUT that was been mated with an unsigned in uniform 8x10 inch photograph perfect for framing.

The black mat measures 11x14 inches. This is the last remaining autographs that I have available of General Peck. PLEASE NOTE the unsigned 8x10 photograph was printed posted war. I ONLY SELL AUTHENTIC HAND AUTOGRAPHED MEMORABILIA.

This item is in the category "Collectibles\Autographs\Military". The seller is "autorazzi91" and is located in this country: US. This item can be shipped worldwide.