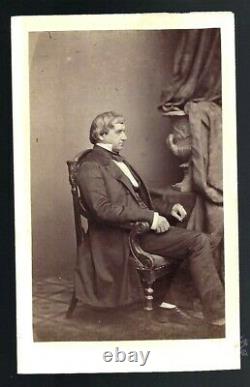 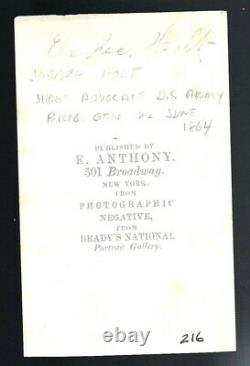 Guaranteed Civil War image from the 1860's. Joseph Holt (January 6, 1807 - August 1, 1894) was an American lawyer, soldier, and politician. As a leading member of the Buchanan administration, he succeeded in convincing Buchanan to oppose the secession of the South. President Abraham Lincoln appointed him the Judge Advocate General of the United States Army.

He served as Lincoln's chief arbiter and enforcer of military law, and supporter of emancipation. His most famous roles came in the Lincoln assassination trials. Joseph Holt was born in Breckinridge County, Kentucky, on January 6, 1807. He was educated at St. Joseph's College in Bardstown, Kentucky and Centre College in Danville, Kentucky.

He settled in Elizabethtown, Kentucky, and set up a law office in town. He married Mary Harrison and moved to Louisville, Kentucky, in 1832.

There, he became assistant editor of the Louisville Public Advertiser and the Commonwealth's Attorney from 1833 to 1835. Holt moved to Port Gibson, Mississippi, and practiced law there as well as in Natchez, Mississippi and Vicksburg, Mississippi. Holt and his wife contracted tuberculosis. President Buchanan and his Cabinet, c. 1859 left to right: Jacob Thompson, Lewis Cass, John B. Floyd, James Buchanan, Howell Cobb, Isaac Toucey, Joseph Holt and Jeremiah S. Following Mary's death, Holt remarried, to Margaret Wickliffe. In 1857, Holt was appointed Commissioner of Patents by President Buchanan and moved to Washington D. He served until 1859 when Buchanan appointed him Postmaster General. The Buchanan administration was shaken in December 1860 and January 1861, when the Confederacy was formed and many cabinet members resigned, but Holt was both against slavery and strongly for the Union.

Supported by his close ally Attorney General Edwin M. Stanton, he was appointed Secretary of War upon the resignation of John B. Floyd of Virginia, who joined the Confederacy.

Stanton and Holt convinced President Buchanan he had to speak out against secession as an illegal act. Buchanan did so, but he also thought he had no power whatever to stop the secession. Kentucky was virtually neutral until Confederate units invaded in 1862, and the Unionist element took control.

Holt joined the Army as a colonel in 1862 and was appointed by President Abraham Lincoln to be the Judge Advocate General of the Union Army. [3][4] As Judge Advocate General of the Army, Holt oversaw the expansion of military law to include the military prosecutions of citizens who were not in the military service. He crafted the argument to the Supreme Court in Ex Parte Vallandigham, [5] By the time he joined the Army, he believed that the only means to prevent treason from occurring again was to ensure that slavery was abolished for all time, and eventually equal treatment under the law enforced in the South.

In 1864, he was promoted to brigadier general. He was the first Judge Advocate General to hold a general's rank. He personally prosecuted the court-martial against Major General Fitz John Porter for crimes of disobedience of a lawful order and misbehavior in front of the enemy. Lincoln also offered Holt the position of Secretary of the Interior that same year and Attorney General later in 1864, but Holt declined both offices.

He was one of the many politicians considered for the Republican Vice Presidential nomination in 1864. It went to Andrew Johnson, and Lincoln was re-elected. According to University of New Mexico, School of Law Professor Joshua E.

Kastenberg, Holt engaged in political activities that were important for the Union's war efforts, but would not be constitutionally permissible today. [8] For instance, Holt crafted legislation that stripped Union Army deserters of their citizenship. The Supreme Court overturned this legislation in Tropp v.

Holt's reasoning for this law was that Copperheads and other pro-slavery southern sympathizers encouraged desertions. Holt also used the Army's power to suppress newspapers as well as oversee the arrest and trial of Congressman Benjamin Gwinn Harris of Maryland who "uttered treasonous statements" in the House of Representatives.

On April 14, 1865, Lincoln was assassinated by Confederate sympathizer John Wilkes Booth. Booth's accomplice, Lewis Powell seriously injured Secretary of State Seward, and Vice President Johnson was also targeted. Holt prepared an order for the signature of Johnson for the arrest of Confederate President Jefferson Davis and five other suspects. Booth was caught on April 26, 1865, but killed by Boston Corbett, a soldier who violated orders. As Judge Advocate General of the Army, Holt was the chief prosecutor in the trial of the accused conspirators before a military commission chaired by General David Hunter.

The second was to assassinate Lincoln, Johnson, and Seward and so throw the government into chaos. On June 29, 1865, the eight were found guilty of conspiracy to kill the President. Arnold, O'Laughlen, and Mudd were sentenced to life in prison, Spangler to six years in prison, and Atzerodt, Herold, Powell, and Surratt to be hanged, the first woman ever to be executed by the US federal government.

[10][11][12] They were executed July 7, 1865. Holt's public image was besmirched by the trial and his prosecution of it, and many historians believe that the controversy surrounding it ended Holt's political career. In 1866, Holt issued a pamphlet, titled Vindication of Judge Advocate General Holt From the Foul Slanders of Traitors, Confessed Perjurers and Suborners, Acting in the Interest of Jefferson Davis, in which he attempted to defend himself against the various allegations and clear up some of the confusion stemming from the trial.

Holt served as Judge Advocate General until he retired on December 1, 1875. He had a quiet retirement and died in Washington on August 1, 1894. He is buried in the Holt Family Cemetery in Addison, Kentucky. Holt County, Nebraska, is named after him, as is the hamlet of Holtsville, New York and the town of Holt, Michigan. This item is in the category "Collectibles\Photographic Images\Photographs". The seller is "civil_war_photos" and is located in this country: US. This item can be shipped worldwide.