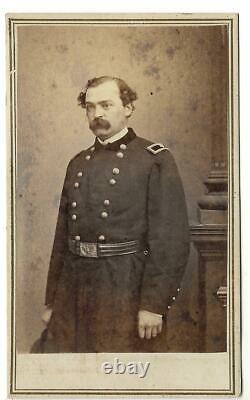 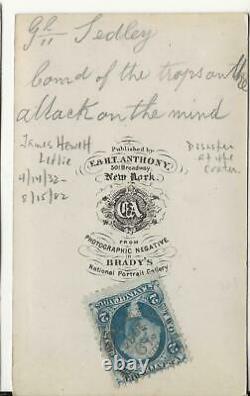 James Hewett Ledlie (April 14, 1832 - August 15, 1882) was a civil engineer for American railroads and a general in the Union Army during the American Civil War. He is best known for his dereliction of duty at the Battle of the Crater during the Siege of Petersburg. Ledlie was born in Utica, New York. His obituary in the New York Times claimed he graduated from Union College, in Schenectady, New York, but the college has no record of his attendance there.

Ledlie worked as a civil engineer on the Erie Canal and in railroad construction. Shortly after the start of the Civil War, Ledlie was appointed major of the 19th New York Infantry, which was subsequently renamed the 3rd New York Artillery regiment. The history of this regiment was marred by a mutiny at the expiration of its original term of service. Ledlie was promoted to colonel in December 1861, and was promoted to brigadier general in command of the Artillery Brigade of the Department of North Carolina in December 1862.

His appointment expired in March 1863 for lack of Senate confirmation, but he was reappointed in October 1863 and later confirmed. For the next year and a half, he served primarily in garrison positions with North Carolina coastal artillery emplacements and in the Department of Virginia and North Carolina. Just after the start of Lt.

Grant's Overland Campaign in 1864, Ledlie transferred to the Army of the Potomac, commanding a brigade in Maj. Ambrose Burnside's IX Corps. On June 9, he was put in command of the 1st Division to succeed Brig. Stevenson, who had been killed a few weeks earlier during the Battle of Spotsylvania.

It was in this command that his brief military career was ruined. During the Siege of Petersburg, former coal miners in Burnside's corps devised an ingenious plan to lift the stalemate by digging a 511-foot tunnel under the Confederate lines, and filling the end of the tunnel with four tons of gunpowder. On July 30, 1864, they detonated the explosives, creating a crater some 135 feet in diameter that remains visible to this day. Some 250 to 350 Confederate soldiers were instantly killed in the blast.

The Union plan was to exploit the explosion by sending well-rehearsed African-American troops of Edward Ferrero's division into the gap and driving for critical objectives deep in the Confederate rear area. Gen George Meade, the commander of the Army of the Potomac, ordered a column of white troops to make the lead assault on the crater instead of Ferrero's division of African American troops, who were trained specifically for the task. The change in battle formation was approved by General Ulysses S.

In his later testimony before the Committee on the Conduct of the War, Meade claimed that he changed the order because the white troops were more experienced, not because he lacked faith in the capabilities of the African American troops. [1] Burnside, despondent at the change in plans, resorted to a lottery to select a replacement division. Ledlie drew the short straw and disaster resulted. His division was the smallest and weakest in the IX Corps, and he did not brief his troops beforehand and they entered the crater out of curiosity instead of moving safely around its rim, as Ferrero's division had been trained to do. Unable to exit the steep sides of the crater, they were slaughtered by Confederates firing down on them. Over 5,300 Union troops were casualties in the ill-fated battle that achieved none of its objectives. Most damning for Ledlie's reputation was the fact that he did not lead, or even accompany, his men into battle, and a few weeks earlier, during the attacks on Confederate entrenchments at Cold Harbor, he had run and hidden for cover, an event that the enlisted men didn't forget, but which managed to escape Burnside's attention.

During the Battle of the Crater, Ledlie and Ferrero were observed behind the lines in a bunker, drinking liquor. Ledlie was criticized by a court of inquiry into his conduct that September, and in December he was effectively dismissed from the service by Maj. Meade, on orders from Gen.

He formally resigned his commission on January 23, 1865. Ledlie resumed his career as a railroad civil engineer in the West and South. He participated in the construction of the transcontinental railroad as an employee of the Union Pacific. He also worked on constructing the Nevada Central Railroad line from Battle Mountain to Austin, Nevada, racing to get the 92-mile line built in half a year to meet a deadline before a bond issue expired.

His crews got within two miles of the city limits of Austin before the deadline, and at the last minute town officials quickly extended the city limits to meet the tracks. Ledlie died in New Brighton, Staten Island in 1882, and is buried in Forest Hill Cemetery, Utica, New York. This item is in the category "Collectibles\Militaria\Civil War (1861-65)\Original Period Items\Photographs". The seller is "civil_war_photos" and is located in this country: US.