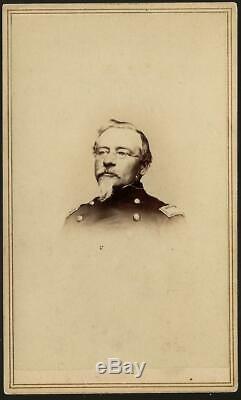 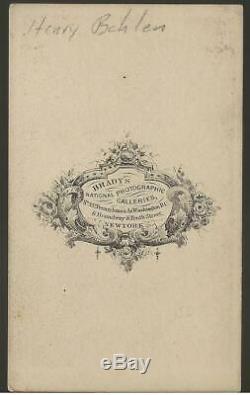 Henry Bohlen (October 22, 1810 August 22, 1862) was a German-American Union Brigadier General of the American Civil War. Before becoming the first foreign-born Union general in the Civil War, [2] he fought in the Mexican-American War on the U. Side, and in the Crimean War (on the French side).

Bohlen was born in Bremen, Germany on October 22, 1810, while his parents were traveling in Europe for pleasure. His father, Bohl Bohlen Luehrs, was a German-born (1754 in Schiffdorf, Lower Saxony, Germany) naturalized citizen of the United States and domiciled in Philadelphia. His mother was Johanna Magdalene Oswald Hahn, a German-American born 1770 in New York.

When Bohlen was very young, his father placed him in one of the first military colleges in Germany. In 1832 however, he was called to the U.

Before he had completed his studies. He did not return to Germany to complete his studies. After immigrating to the United States, Bohlen became a rich dealer of foreign wines and liquor.

When war with Mexico broke out he accepted a position on the staff of his friend and companion, General Worth, as a volunteer Aide-de-camp. [1] During the war he participated in all the battles under Major-General Winfield Scott. Due to the health of his son, he traveled to Europe. When the Crimean War broke out, he entered the service of the allies, on the French staff.

During the war he took part in the siege, storming and the final surrender of Sevastopol. [1] After the war ended, he lived in the Netherlands until he heard word of the firing on and surrender of Fort Sumter.

In 1861 he was granted permission to recruit a regiment in Philadelphia, which was made up of mostly German emigrants. He played a key role in organizing the 75th Pennsylvania Volunteer Infantry, and he was named its Colonel and commander on September 30, 1861. [3] He served in the division of Louis Blenker.

Bohlen was appointed Brigadier General, U. Volunteers, on April 28, 1862. [3] He commanded the 3rd Brigade of Carl Schurz's Division in the 1862 Valley Campaign against Stonewall Jackson.

His brigade covered the retreat of the Union forces at the Battle of Cross Keys and also participated in the Battle of Cedar Mountain. While conducting reconnaissance on the Rappahannock River during the initial stages of the Northern Virginia Campaign, Bohlen was killed when his force was attempting to recross the river.

On August 26, 1862, The New York Times reprinted an article from The Philadelphia Press about the death of Bohlen. And the army was safely across the Rappahannock, still nearest the enemy, Bohlen's brigade was fighting continually, and unfortunately for the country and its cause... Bohlen was observed by a rebel sharpshooter, while riding across the field, directing the movements of his troops, and shot through the head. There were rumors that Bohlen was killed by one of his own men, but evidence suggests that he was liked by his troops and that he died from enemy fire through a shot by a Confederate sharpshooter.

Charles Saalmann an infantry officer who initially served under Henry Bohlen during Bohlen's command of the 75th Pennsylvania Regiment of Volunteer infantry. The item "Civil War CDV Union General Henry Bohlen KIA West Virginia" is in sale since Monday, June 8, 2020. This item is in the category "Collectibles\Militaria\Civil War (1861-65)\Original Period Items\Photographs". The seller is "civil_war_photos" and is located in Midland, Michigan. This item can be shipped worldwide.