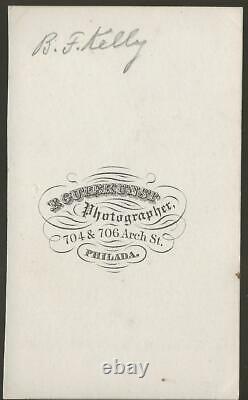 Benjamin Franklin Kelley (April 10, 1807 July 16, 1891) was an American soldier who served as a brigadier general in the Union Army during the American Civil War. He played a prominent role in several military campaigns in West Virginia and Maryland. Kelley was born in New Hampton, a small village in New Hampshire. At the age of 19, he went to Wheeling, Virginia, a center of the slave trade. At outbreak of the Civil War he was living in Philadelphia and working for the B&O Railroad.

He left his position there and moved to Wheeling to take command of the 1st Virginia Infantry, a Federal volunteer three-months regiment, and was appointed as its colonel. [1][2] His first service was at Philippi, where he captured the Confederate camp equipage and was himself badly wounded. He was promoted to brigadier general of volunteers on August 5, 1861, backdated to May, and was victorious at Romney and Blue's Gap (Hanging Rocks Pass). Afterward, Kelley commanded a division of 10,000 men in the Department of Harper's Ferry. In 1862 he served under Maj.

Frémont, and the following year he was in command of the West Virginia department and pursued General Robert E. Lee during the Retreat from Gettysburg. In 1864, he checked the enemy at Folck's Mill, New Creek, and Moorefield, West Virginia. He was brevetted as a major general of volunteers on August 5, 1864. Kelley, along with his immediate superior Maj.

George Crook, was captured by a small raiding party of Confederate partisans on February 21, 1865. He resigned from the army on June 1, 1865.

After the war ended, Kelley was appointed an internal revenue collector in 1866. After serving in that role for ten years, he became the head of the Hot Springs, Arkansas, Military Reservation in 1876.

In 1883, President Chester A. Arthur appointed him an examiner of pensions. Kelley died in Oakland, Maryland, and was interred in Arlington National Cemetery. His grave was created by sculptor W. The gravestone is made of granite 6 x 5 x 3 ft. With a relief 2 x 2 x 6 ft. Of bronze inset on the front of the stone, just above two inscribed plaques. The relief is a bust of Kelley, who has a full goatee, mustache, and a military uniform. One plaque on the gravestone is inscribed. COLONEL 1ST VIRGINIA VOLUNTEER INFANTRY. BRIGADIER AND BREVET MAJOR GENERAL. WOUNDED AT THE BATTLE OF PHILLIPI VIRGINIA. Another plaque on the gravestone is inscribed. It was surveyed by the Smithsonian's Save Outdoor Sculpture! Survey in 1995 and was declared as needing treatment. List of American Civil War generals (Union).