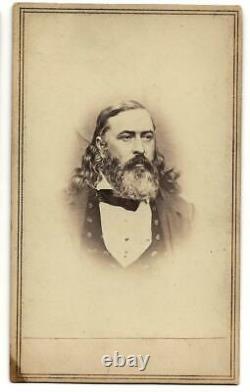 Albert Pike (December 29, 1809 April 2, 1891) was an American author, poet, orator, jurist and prominent member of the Freemasons. He was also a senior officer of the Confederate States Army who commanded the District of Indian Territory in the Trans-Mississippi Theater of the American Civil War. Views on race and Ku Klux Klan membership allegations. Albert Pike was born in Boston, Massachusetts, on December 29, 1809, the son of Benjamin and Sarah (Andrews) Pike, and spent his childhood in Byfield and Newburyport, Massachusetts. His colonial ancestors settled the area in 1635, [1] and included John Pike (16131688/1689), the founder of Woodbridge, New Jersey.

[2] He attended school in Newburyport and Framingham until he was 15. He began a program of self-education, later becoming a schoolteacher in Gloucester, North Bedford, Fairhaven and Newburyport. Pike was an imposing figure; 6 feet (1.83 m) tall and 300 pounds (140 kg) with hair that reached his shoulders and a long beard. [4][5] In 1831, he left Massachusetts to travel west, first stopping in Nashville, Tennessee, and later moving to St. There he joined a hunting and trading expedition to Taos, New Mexico.

[1] En route his horse broke and ran, forcing Pike to walk the remaining 500 miles (800 km) to Taos. After this, he joined a trapping expedition to the Llano Estacado in New Mexico and Texas.

Trapping was minimal and, after traveling about 1,300 miles (2,100 km), half of it on foot, he finally arrived at Fort Smith, Arkansas. Settling in Arkansas in 1833, Pike taught in a school and wrote a series of articles for the Little Rock Arkansas Advocate under the pen name of Casca. [6] The articles were sufficiently well received for him to be asked to join the newspaper's staff. Under Pike's administration, the Advocate promoted the viewpoint of the Whig Party in a politically volatile and divided Arkansas in December 1832. He was the first reporter for the Arkansas Supreme Court.

He wrote a book (published anonymously), titled The Arkansas Form Book, which was a guidebook for lawyers. He also made several contacts among the Native American tribes in the area. He specialized in claims on behalf of Native Americans against the federal government. [4] In 1852, he represented Creek Nation before the Supreme Court in a claim regarding ceded tribal land.

In 1854 he advocated for the Choctaw and Chickasaw, although compensation later awarded to the tribes in 1856 and 1857 was insufficient. [7] These relationships were to influence the course of his Civil War service.

He joined the anti-Catholic Know Nothing Party at its founding, [6] and, in the summer of 1854, helped introduce the party in Arkansas. [9] He attended the national convention in 1856, but walked out when it failed to adopt a pro-slavery platform. [6] In the lead-up to the Civil War, Pike signed a pamphlet which proposed expelling all free African Americans from Arkansas. It said that the "evil is the existence among us of a class of free colored persons".

Additionally, Pike wrote on several legal subjects. He also continued writing poetry, a hobby he had begun in his youth in Massachusetts.

His poems were highly regarded in his day, but are now mostly forgotten. Several volumes of his works were privately published posthumously by his daughter.

In 1859, he received an honorary Master of Arts degree from Harvard. When the MexicanAmerican War started, Pike joined the Regiment of Arkansas Mounted Volunteers (a cavalry regiment) and was commissioned as a troop commander with the rank of captain in June 1846. With his regiment, he fought in the Battle of Buena Vista. Pike was discharged in June 1847. He and his commander, Colonel John Selden Roane, had several differences of opinion.

This situation led finally to an "inconclusive" duel between Pike and Roane on July 29, 1847, near Fort Smith, Arkansas. [12] Although several shots were fired in the duel, nobody was injured, and the two were persuaded by their seconds to discontinue it. [14] He wrote another book, Maxims of the Roman Law and Some of the Ancient French Law, as Expounded and Applied in Doctrine and Jurisprudence. [15] Although unpublished, this book increased his reputation among his associates in law. At the Southern Commercial Convention of 1854, Pike said the South should remain in the Union and seek equality with the North, but if the South were forced into an inferior status, she would be better out of the Union than in it.

[16] His stand was that state's rights superseded national law and he supported the idea of a Southern secession. This stand is made clear in his pamphlet of 1861, State or Province, Bond or Free? In 1861, Pike penned the lyrics to Dixie to Arms! [17] At the beginning of the war, Pike was appointed as Confederate envoy to Native American nations. In this capacity he negotiated several treaties, one of the most important being with Cherokee chief John Ross, which was concluded in 1861.

At the time, Ross agreed to support the Confederacy, which promised the tribes a Native American state if it won the war. Ross later changed his mind and left Indian Territory, but the succeeding Cherokee government maintained the alliance. Pike was commissioned as a brigadier general in the Confederate States Army on November 22, 1861, and given a command in the Indian Territory. Ben McCulloch, Pike trained three Confederate regiments of Indian cavalry, most of whom belonged to the "civilized tribes", whose loyalty to the Confederacy was variable.

Although initially victorious at the Battle of Pea Ridge (Elkhorn Tavern) in March 1862, [1] Pike's unit was defeated later in a counterattack, after falling into disarray. When Pike was ordered in May 1862 to send troops to Arkansas, he resigned in protest.

[7] As in the previous war, Pike came into conflict with his superior officers, at one time drafting a letter to Jefferson Davis complaining about his direct superior. After Pea Ridge, Pike was faced with charges that his Native American troops had scalped soldiers in the field. [20] Both these charges were later found to be considerably lacking in evidence; nevertheless Pike, facing arrest, escaped into the hills of Arkansas, submitting his resignation from the Confederate States Army on July 12, 1862. [20] He was arrested on November 3 on charges of insubordination and treason, and held briefly in Warren, Texas. His resignation was accepted on November 11, and he was allowed to return to Arkansas.

On June 24, 1865, Pike applied for a pardon, disowning his earlier interpretation of the U. He said he now planned "to pursue the arts of peace, to practice my profession, to live among my books, and to labour to benefit my fellows and my race by other than political courses". President Andrew Johnson pardoned him on April 23, 1866. Part of a series on. Grand LodgeMasonic lodgeMasonic lodge officersGrand MasterPrince Hall FreemasonryRegular Masonic jurisdictionAnglo-American FreemasonryContinental Freemasonry. Pike first joined the fraternal Independent Order of Odd Fellows in 1840. He next joined a Masonic Lodge, where he became extremely active in the affairs of the organization. In 1859 he was elected Sovereign Grand Commander of the Scottish Rite's Southern Jurisdiction. [12] He remained Sovereign Grand Commander for the rest of his life, devoting a large amount of his time to developing the rituals of the order. [22] He published a book called Morals and Dogma of the Ancient and Accepted Scottish Rite of Freemasonry in 1871, the first of several editions. This helped the Order grow during the nineteenth century. He also researched and wrote the seminal treatise Indo-Aryan Deities and Worship as Contained in the Rig-Veda. In the United States, Pike is still considered an eminent[23] and influential[24] Freemason, primarily in the Scottish Rite Southern Jurisdiction. In the aftermath of the Civil War, as former Confederates found themselves barred from the ballot box, Pike remained deeply opposed to black suffrage, insisting that the white race, and that race alone, shall govern this country. It is the only one that is fit to govern, and it is the only one that shall. "[26] Regarding membership in the Freemasons, Pike is quoted as saying, "I took my obligation to White men, not to Negroes. When I have to accept Negroes as brothers or leave Masonry, I shall leave it! Various histories of the Ku Klux Klan published in the early 20th century identify Pike as a high-ranking official of the order.

Walter Lynwood Fleming, in 1905's Ku Klux Klan: Its Origin, Growth and Disbandment, lists Pike as the Klan's "chief judicial officer". Horn says that a pro-Klan poem, Death's Brigade, is attributed to Pike. [32] Southern Agrarian poet John Gould Fletcher, who grew up in Little Rock in a house that Pike built, [33] also believed Pike was the poem's author. However, Walter Lee Brown in his 1997 biography, found a lack of evidence that Pike was a member of the Klan. [26] He cites Allen W.

Trelease, author of 1971's White Terror: The Ku Klux Klan Conspiracy and Southern Reconstruction, as being doubtful of Pike's membership, as the offices Pike allegedly held are not mentioned in "The Prescript", the Klan constitution. Pike's only known writing on the Klan, an 1868 editorial in the Memphis Daily Appeal, indicates that his main problems lay not with its aims, but with its methods and leadership. Later in this editorial, he proposed "one great Order of Southern Brotherhood, " a secret society which would have been a larger and more centrally organized version of the Klan: If it were in our power, if it could be effected, we would unite every white man in the South, who is opposed to negro suffrage, into one great Order of Southern Brotherhood, with an organization complete, active, vigorous, in which a few should execute the concentrated will of all, and whose very existence should be concealed from all but its members. During the Arkansas political conflict known as the Brooks-Baxter War, Pike was one of the lawyers to speak on behalf of Elisha Baxter. Pike died on April 2, 1891, in Washington, D.

At the age of 81, and was buried at Oak Hill Cemetery, despite the fact that he had left instructions for his body to be cremated. [37] In 1944, his remains were moved to the House of the Temple, headquarters of the Southern Jurisdiction of the Scottish Rite. A memorial to Pike was erected in 1901 in the Judiciary Square neighborhood of Washington, D. He was the only Confederate military officer with an outdoor statue in Washington, D. And in 2019 Delegate Eleanor Holmes Norton called for its removal. [38] On June 19, 2020, protestors tore down the statue and set it ablaze, in connection with the George Floyd protests because of Pike's association with the Confederacy. The Albert Pike Memorial Temple is an historic Masonic lodge in Little Rock, Arkansas; the structure is listed on the National Register of Historic Places. Albert Pike Memorial, Washington, D. As a young man of letters, Pike wrote poetry, and he continued to do so for the rest of his life.

At 23, he published his first poem, Hymns to the Gods. Later work was printed in literary journals such as Blackwood's Edinburgh Magazine and local newspapers. His first collection of poetry, Prose Sketches and Poems Written in the Western Country, was published in 1834. [5] He later gathered many of his poems and republished them in Hymns to the Gods and Other Poems (1872).

After his death these were published again in Gen. Albert Pike's Poems (1900) and Lyrics and Love Songs (1916). The authorship of "The Old Canoe" was attributed to Pike.

He was suggested as author because about the time of its publication, when it was going the rounds of the press, probably without any credit, a doggerel called "The Old Canoe" was composed about Pike by one of his political foes. The subject was a canoe in which he left Columbia, Tennessee, when a young man practicing law in that place. Pike told Senator Edward W. Carmack that he was not the author of "The Old Canoe, " and could not imagine how he ever got the credit for it. The rightful author was Emily Rebecca Page.

The item "Civil War CDV Confederate General Albert Pike" is in sale since Friday, December 4, 2020. This item is in the category "Collectibles\Militaria\Civil War (1861-65)\Original Period Items\Photographs". The seller is "civil_war_photos" and is located in Midland, Michigan. This item can be shipped worldwide.