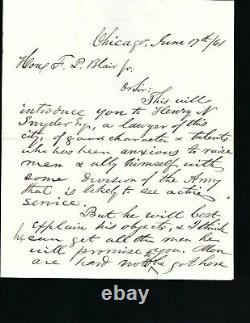 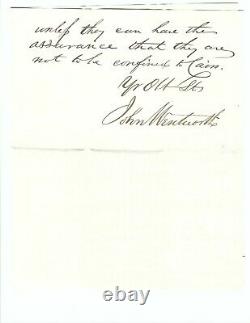 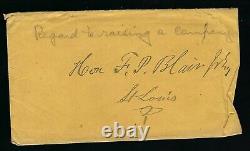 Wonderful early Civil War June 17th 1861 ALS written by the Mayor of Chicago to Congressman Frank Blair Jr talking about getting men for the Army that Blair was trying to raise in Missouri to defend the State. Interesting comment in the letter is that the men would not want to be restricted to Cairo Illinois! "Long John" John Wentworth had a long Political Career. Comes with the transmission envelope with Congressman Blairs name on it.

"Long John" Wentworth dominated Chicago politics from the time he arrived in the city as a young Jacksonian Democrat until he left public life as a Republican supporter of Abraham Lincoln. So-called for his six foot six inch height, "Long John" had been born in New Hampshire, graduated from Dartmouth College, and arrived in Chicago in 1836. He quickly became the editor of the Chicago Democrat and two years later owned the paper. Raucous and partisan as a newspaperman, he was elected in 1843 as the youngest, and tallest, member of the 24th Congress. His growing opposition to slavery, culminating in his vote against the Kansas-Nebraska Bill, ended his congressional career in 1854.

He became a Republican, stumping for Fremont in 1856 and supporting Lincoln in 1858 and 1860. He also served two terms as a flamboyant and heavy handed mayor of Chicago.

Few fellow Republicans came to terms with his arbitrary style, ambition, and popularity and he was often at odds with others in the party. Abruptly, in 1861, after supporting Lincoln for president and then urging that no compromises with the South, he closed his newspaper and retired from public life. He spent his remaining decades tending to his 5000 acre estate, and writing on local history. His wife died in 1870 and only one of his five children was living when he himself died in October 1888. Characteristically, he had built a 72 feet obelisk, the tallest in the Rosehill Cemetery, to mark his last resting place. Father: Paul Wentworth 1782 - 1855. Mother: Lydia Cogswell 1793 - 1872. Wife: Roxana Marie Loomis 1817 - 1870.

Editor and Manager of Chicago Democrat Newspaper. 1837 - 1838: City Printer for the City of Chicago Illinois.