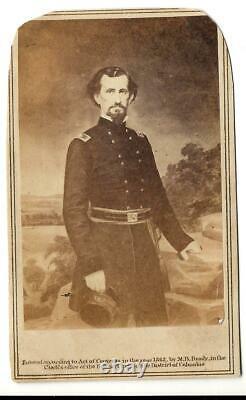 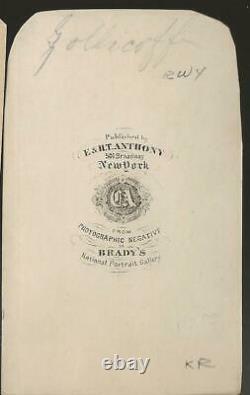 Felix Kirk Zollicoffer (May 19, 1812 January 19, 1862) was an American newspaperman, politician, and soldier. A three-term United States Congressman from Tennessee, an officer in the United States Army, and a Confederate brigadier general during the American Civil War; he led the first Confederate invasion of eastern Kentucky and was killed in action at the Battle of Mill Springs. Zollicoffer was the first Confederate general to die in the Western Theater. Felix Zollicoffer was born on a plantation in Bigbyville in Maury County, Tennessee, [1] a son of John Jacob and Martha (Kirk) Zollicoffer. [2] He was descended from emigrants from Switzerland who had settled in North Carolina in 1710.

Zollicoffer attended the local schools and studied for a year at Jackson College in Columbia, Tennessee. [2] He left at the age of sixteen, became an apprentice printer, and was engaged in newspaper work in Paris, Tennessee, from 1828 to 1830.

[2] When the newspaper closed, he moved to Knoxville in 1831 and worked for two years as a journeyman printer at the Knoxville Register. [2][4] Three years later, he became editor and part owner of the Columbia Observer. [1][3] Zollicoffer was elected State Printer of Tennessee in 1835.

On September 24, 1835, he married Louisa Pocahontas Gordon, with whom he had fourteen children, of whom only six survived infancy. [2] Gordon was the daughter of Captain John Gordon who had fought alongside Andrew Jackson at Horseshoe Bend and Pensacola. [6] She was a direct descendant of Pocahontas through her mother, Dolly. [citation needed] Louisa Zollicoffer died in 1857.

Zollicoffer also edited the Mercury for a time in Huntsville, Alabama. [2] He volunteered for the army in 1836 and served as a second lieutenant in the Tennessee militia in the Second Seminole War in Florida. This brought Zollicoffer into political circles, and he was Comptroller of the State Treasury from 1845 to 1849, as well as Adjutant General for the state. [2] He was a member of the State Senate from 1849 until 1852, and was a delegate to the Whig National Convention in 1852, supporting General Winfield Scott.

[2] Zollicoffer was himself elected as a Whig to the Thirty-third United States Congress and was reelected as a candidate of the American Party to the Thirty-fourth and Thirty-fifth Congresses (March 4, 1853 March 3, 1859). [2] During his first campaign, he fought a duel with the editor of the rival Nashville Union newspaper. [7] He declined to be a candidate for renomination in 1858 and retired to private life.

He supported fellow Tennessee moderate John Bell (CU) for president in the election of 1860. Following the secession of the Deep South in 1861, Zollicoffer served as a delegate to that year's peace conference in Washington, D. In an attempt to prevent the approaching civil war. [2] A strong supporter of states' rights, Zollicoffer nevertheless opposed Tennessee's secession from the Union.

Tennessee voters rejected the call for a secession convention in February 1861. [9] Tennessee Governor Isham Harris soon began to maneuver the state into a position where secession would be inevitable. [9] On May 6, 1861, the Tennessee legislature, urged on by Harris, adopted a Declaration of Independence and Ordinance. [9] The people were to vote on the ratification of this measure on June 8. [9] A separate vote on the same date would determine if Tennessee should join the Confederacy if the voters approved the measure asserting independence of the State.

[16] For almost four months, Zollicoffer was in the strange position of being a Confederate Army general in charge of state troops. Harris initially tried to sway eastern Tennessee's pro-Union population with a lenient policy and the stationing of only fifteen companies of troops in the region. [18] On July 26, 1861, Harris, who was still in charge of the Tennessee state force, ordered Zollicoffer and 4,000 raw recruits to Knoxville to be in position to suppress resistance to secession in East Tennessee, appointing him to command the District of East Tennessee. [19] Harris was re-elected governor on August 8, 1861 and on August 18, he ordered Zollicoffer to arrest and, if necessary, banish leaders of pro-Union factions from the state, changing his policy from leniency to force. In an effort to prevent a Union Army incursion into east Tennessee, Zollicoffer took the initiative and occupied Cumberland Gap on September 14, 1861.

[21] Zollicoffer then was responsible for guarding the 128 miles (206 km) of Confederate line between Cumberland Gap and Tompkinsville, Kentucky. [22][23] For 71 miles, this line crossed the Cumberland Mountains. [22] On September 15, 1861, General Albert Sidney Johnston assumed command of Confederate forces in the Western Theater between the Appalachian Mountains and the Mississippi River. [24] He retained Zollicoffer as district commander in east Tennessee.

On September 17, 1861, Zollicoffer sent a force through the Cumberland Gap along the Wilderness Road to drive the Union Army from Barbourville, Kentucky, relieve pressure on the recently established Confederate line at Bowling Green, Kentucky and thwart an expected drive by Union Brigadier General George H. Thomas into eastern Tennessee and the Cumberland Gap by forcing him to retain his force in Kentucky. [25] On September 19, 800 of Zollicoffer's men under Colonel Joel Battle ambushed the Union force of about 150 home guards while they were foraging and pushed them out of Barbourville at the minor Battle of Barbourville.

[23][25][26] Another detachment of Zollicoffer's force under Colonel James Rains dispersed an encampment of Union recruits at Laurel Bridge, Kentucky, on September 26, 1861, while the Goose Creek Salt Works were attacked by a second Confederate unit under Colonel D. Cummings, which carried off 200 barrels of salt. [23][27] Zollicoffer's force was essentially on a raid and soon withdrew.

In mid-October 1861, a large part of Zollicoffer's force marched 40 miles (64 km) from Cumberland Gap to London, Kentucky. [29] At the Battle of Wildcat Mountain on October 21, Zollicoffer's force was stymied by a prepared Union force fighting on rugged terrain, and he soon retreated into rural eastern Tennessee, which remained rife with Union sentiment. In November 1861, Zollicoffer changed strategy and advanced westward, then back into southeastern Kentucky to strengthen Confederate control in the area just south of Somerset. [28] He hoped this would put him in a position to be reinforced by Confederate forces from Bowling Green and to drive Thomas's force from the area.

[28] Before he moved west, Zollicoffer left forces to guard the Cumberland Gap and three other approaches to east Tennessee. Zollicoffer moved west and established an encampment at Mill Springs, Kentucky, (near present-day Nancy, Kentucky) on the south bank of the Cumberland River. [28] By December 6, he had moved his force to the north bank of the river, where he thought he could better support the supply of his men, build fortifications and keep watch on Thomas's force. [31][32] This was a risky tactic because Zollicoffer's men were poorly equipped, ill-trained and ill-disciplined.

[31][33] They were not properly prepared to meet the growing Union threat and Zollicoffer's expectation that he would solve this problem by receiving supplies and reinforcements at Beech Grove, opposite Mill Springs, was too optimistic. [31] Many of the men in Confederate service in Tennessee who could have reinforced Zollicoffer remained unarmed. [34] Zollicoffer's own reserve force at Knoxville was mostly unarmed. Under the circumstances in December 1861, without needed supplies or reserves, Zollicoffer was in no position to move against the Union force. [35] On December 20, 1861, Zollicoffer did not respond to a movement by a force under Brigadier General Albin F.

Schoepf, who was attempting to provoke Zollicoffer to commit his force to an engagement in the open. Carroll did not leave Knoxville with his brigade to join Zollicoffer until January 16, 1862. [35] Ultimately, he could bring only a single regiment to Mill Springs, having been ordered to send the rest of his men to Bowling Green. Unaware of the situation in east Tennessee and of Zollicoffer's plan, on December 8, 1861, Confederate President Jefferson Davis appointed Major General George B. Crittenden to command the district of East Tennessee in order to lead a force into Kentucky.

[37] Crittenden assumed command of the district, only to find that the ten regiments he expected to find there did not exist. [37] Crittenden retained Zollicoffer as commander of the 1st Brigade in his army.

On December 15, Zollicoffer sent word to Crittenden that Thomas had ten regiments under his command. [37] While lingering at Knoxville for two more weeks, Crittenden sent word to Zollicoffer to move back to the south side of the Cumberland River. [37] Zollicoffer now had only two rafts to cross the swollen river which was nearly at flood stage, [37] so he stayed at Beech Grove on the north side of the river. On January 1, 1862, Thomas moved from his camp at Lebanon, Kentucky, to join with Schoepf's troops from Somerset.

[37] On January 2, Crittenden arrived at Mill Springs and decided the Confederates should attack Thomas before he could join with Schoepf. [37] The Confederate force of about 6,500 men might have withstood an attack within their fortifications, but Thomas's larger force would have the advantage in the open field. [38] Because of the incessant rain and resulting mud, Thomas needed 18 days to move his force and equipment from Lebanon to Logan's Crossroads. "First in the fight and first in the arms of the white winged angel of glory, with his hero heart at the feet of God and his wounds to tell the story" grave of General Felix K. Zollicoffer at Nashville City Cemetery.

On January 18, 1862, Crittenden ordered an advance at midnight, while the two Union forces under Thomas and Schoepf were separated by the rain-swollen Fishing Creek. [38] Zollicoffer led the first brigade toward Logan's Crossroads, while Carroll commanded the following brigade. After marching 8 miles (13 km) in a driving rain, Zollicoffer's skirmishers attacked the Union pickets 1 mile (1.6 km) south of the intersection of the Mill Springs and Columbia-Somerset roads. [38][40] The Battle of Mill Springs, sometimes called the Battle of Fishing Creek or the Battle of Logan's Crossroads, a three-hour fight in driving rain, fog and the smoke of battle over thickly wooded ground, followed.

[38] The untrained Confederates were totally confused in this situation and their organization was lost. [38] Adding to the confusion, some of the Confederates were wearing blue uniforms. The 15th Mississippi Infantry Regiment mistook the Union 4th Kentucky Infantry Regiment for blue-clad Confederates. [41] In the confusion, the near-sighted Zollicoffer, wearing a white raincoat, rode into the lines of the 4th Kentucky and began to discuss the problem with the Union colonel, Speed S.

[41] A Confederate aide then rode out of the fog firing at the Union force. Daniel follows some other accounts which claim that Fry recognized and shot Zollicoffer. [42] He further stated that Fry, not Zollicoffer, had ridden into the enemy lines and had begun the conversation, only turning upon Zollicoffer when the Confederate aide rode up. Sanders discusses the encounter at the greatest length and also quotes a subsequent account by Colonel Fry. [43] He states that both officers rode out from their lines and that Fry initially thought Zollicoffer was a Union officer. [43] Fry claimed to have shot Zollicoffer. [44] Other accounts state that Fry also called to a few of his men to fire, although Fry later denied this.

Many of the old Confederate flintlock weapons would not fire in the wet conditions and Zollicoffer's death caused his demoralized men to start a retreat. [41] Thomas sent six regiments against the weak Confederate flank, causing the Confederate line to collapse and retreat to Beech Grove. [41] Crittenden moved the remaining force across the Cumberland River overnight on a small steamboat and a few barges.

[47] He left his artillery, mules, equipment and most of his food supply on the north bank. [47] The Union had gained a significant victory and boost in morale, while the Confederates had lost a brave, if unskilled, general, along with about 500 men and the small army's equipment and supplies. The Federals treated Zollicoffer's body with respect.

This public park receives at least two memorial events each year, one on January 19, ("that somber sabbath morn") and the other on Memorial Day. There have also been re-enactments of the Battle of Mill Springs. The item "Carte de Visite Civil War Confederate General Felix Zollicoffer KIA" is in sale since Saturday, July 31, 2021. This item is in the category "Collectibles\Militaria\Civil War (1861-65)\Original Period Items\Photographs".