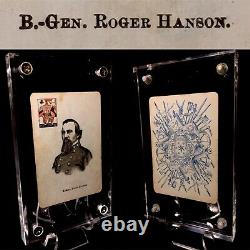 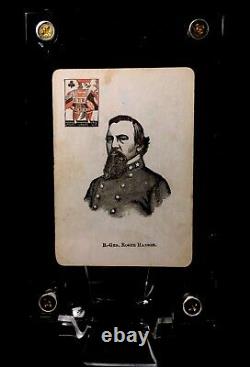 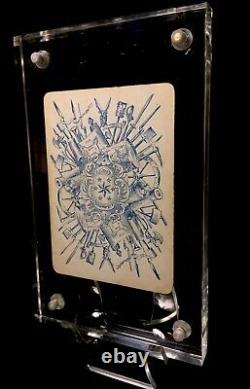 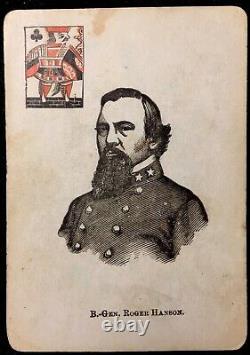 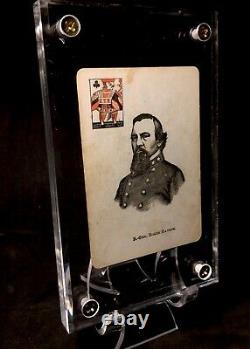 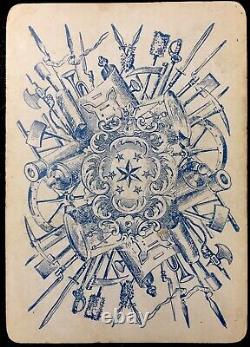 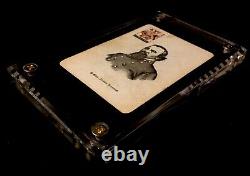 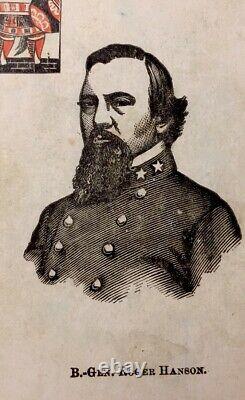 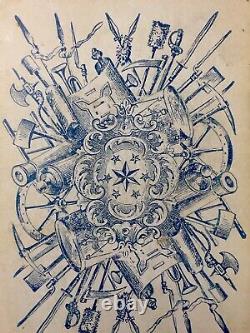 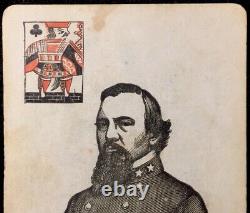 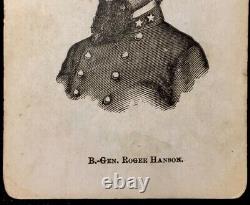 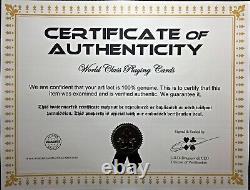 Publisher: MORTIMER NELSON / Printed During the War / Museum Quality. TITLE: Confederate Generals / Labeled Portrait / High Ranking Officers or Statesman & Senior military leaders. Roger Weightman Hanson (August 27, 1827 - January 4, 1863) was a brigadier general in the Confederate States Army during the American Civil War. The commander of the famed "Orphan Brigade, " he was mortally wounded at the Battle of Murfreesboro. He was nicknamed Old Flintlock. They were often former officers from the United States Army prior to the Civil War, while others were given the rank based on merit or when necessity demanded. This is a true piece of card history as each Civil War artifact does tell a story and also proves that owning such a magnificent Confederate card is truly remarkable! Gorgeous spectacular example is one reason to own such a piece that's rich in history.

BEGIN A NEW JOURNEY AND EMBARK ON A PERSONAL AND PRIVATE COLLECTION THAT WILL GROW ELEGANTLY INTO YOUR VERY OWN PRESTIGIOUS MUSEUM QUALITY DISPLAY OF TRUE CARD MAKING HISTORY! On February 28, 1861, the Provisional Confederate Congress established a provisional volunteer army and gave control over military operations and authority for mustering state forces and volunteers to the newly chosen Confederate president, Jefferson Davis. Davis was a graduate of the U. Military Academy, and colonel of a volunteer regiment during the Mexican-American War. He had also been a United States Senator from Mississippi and U.

Secretary of War under President Franklin Pierce. On March 1, 1861, on behalf of the Confederate government, Davis assumed control of the military situation at Charleston, South Carolina, where South Carolina state militia besieged Fort Sumter in Charleston harbor, held by a small U. By March 1861, the Provisional Confederate Congress expanded the provisional forces and established a more permanent Confederate States Army. Your historic artifact will be delivered in this archival 1/2 inch lucite protective case. Please subscribe in our newsletter to the greatest card store as we are adding daily and offering huge weekly discounts to subscribed Ebayers!

Collecting playing cards can be a very rewarding hobby. There is the excitement of the hunt for new historic Singles, whether through collectors' meetings, internet auctions or at shows and even flea markets where every new table may unfold the unexpected treasure. Even better, there is the enjoyment of fellow collectors, some of the most interesting people in the world! Many weapons were used in the The Civil War from knives to swords along with a variety of firearms, including rifles, pistols, muskets, and repeating weapons.

Also widely used was artillery including cannons. Some of the new weapon technologies used in the civil war include rifled gun barrels, the Minie ball and repeating rifles.

Cannons played a major role in the the civil war. Some of the cannon used by union and confederate forces include the 12 pound Howitzer, the 10 pound Parrot rifle, and the 3 inch ordnance rifle. Lean more about Civil War Cannon.

Civil War Guns / Drums / Bugles. The civil war brought many advancements in gun technology, most notably the widespread use of rifled barrels. Popular rifles used in the civil war include the Springfield rifle, the Lorenz rifle, the Colt revolving rifle. Lean more about Civil War Guns.

Learn more about Civil War Swords. The Minié Ball (aka Minie Ball) was a type of bullet that was used throughout the Civil War.

We pride ourselves on our customer service. You may also be interested in.... The item "B- General Roger Hanson CSA Civil War Playing Cards Historic Military Single" is in sale since Sunday, May 17, 2020. This item is in the category "Collectibles\Paper\Playing Cards". The seller is "worldclassplayingcards" and is located in New Castle, Pennsylvania.