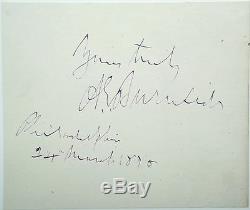 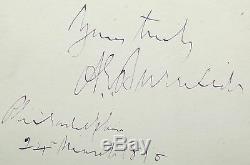 Ambrose Everett Burnside [1824 1881] was a politician, railroad executive, inventor, industrialist, military officer and businessman who served as Union general in the American Civil War. Burnside began his military career in 1847 and was a veteran of the Mexican-American War. Burnside conducted successful campaigns in North Carolina and East Tennessee during the Civil War and later served as the 30th Governor of Rhode Island and as a U. S Senator from Rhode Island.

The autograph is signed''yours truly A. Burnside Philadelphia 24 March 1875'' in fountain pen. The page measures 5.00 x 4.00 inches, it has trivial toning otherwise it is in fine condition.

The autograph is authentic and will be a nice addition to any Civil War collection. We have listed a nice collection of military, astronaut and aviation autographs.

Our policy is simple, all our autographs are researched and guaranteed authentic with''No'' time limits. Be sure to add me to your favorites list. The item "Ambrose Burnside Union Civil War General & Senator & Governor Autograph" is in sale since Tuesday, June 20, 2017.

This item is in the category "Collectibles\Autographs\Military".view" and is located in West Hempstead, New York. This item can be shipped worldwide.