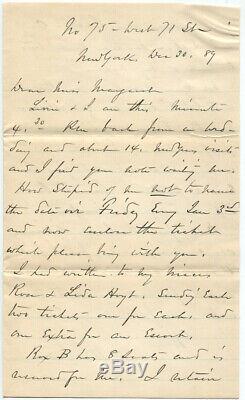 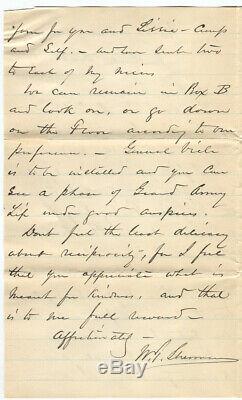 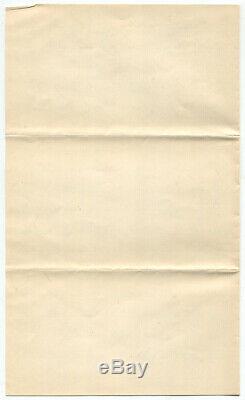 On December 30, 1889, Sherman wrote from his home on the Upper West Side of New York City to follow up with his close friend, Margaret Middleton, regarding an invitation he had extended the day before. He invited her to attend a Grand Army of the Republic event at the Lenox Lyceum on Madison Avenue with him and several members of his extended family, assuring her that she would like his nieces. How stupid of me not to name the date on Friday evening Jan 3rd and now enclose the ticket which please bring with you. I had written to my nieces Rose & Lida Hoyt, sending each two tickets - one for each and one extra for an escort. Box B has 8 seats and is reserved for me.

I retain four for you and Lizzie, Cump [Sherman's son] and self, and have sent two to each of my nieces. We can remain in Box B and look on, or go down on the Floor according to our preference. General [Egbert Ludovicus] Viele is to be installed and you can see a phase of Grand Army Life under good auspices. Don't feel the least delicacy about reciprocity; for I feel that you appreciate what is meant for kindness, and that is to me full reward.

" He signs off, "Affectionately, W. This autograph letter signed is written on the first two pages of a sheet of ruled writing paper, measuring approximately 9.25" x 11" when unfolded. He rejoined the military for the US Civil War, becoming one of its most famous generals for leading Union troops across the south in "scorched earth" campaigns. After the War, he continued his military career and was promoted to General of the Army, his troops primarily fighting Native Americans along the wagon trails and railroads. In retirement, he was a constant presence at New York's theatres, lectures, and galleries, and also occasionally thrilled audiences at speaking engagements.

She also dedicated a portion of her time to work with charitable organizations. Like Sherman, she was an aficionado of theatre and the arts. Although she was nearly three decades younger than Sherman, the two struck up a close relationship in the 1880s based on their common interests, and often attended events together. It seems they may have been introduced by mutual friend, Mary Thompson Hunt, whose 1884 death brought them closer. Condition : Fold lines, short separations at the edges of the upper horizontal fold (the separation that affects pages 1 and 2 has been neatly repaired with archival tissue/tape), creasing at the upper right corner with a sliver of paper loss from the upper edge. Otherwise in very good condition, and an interesting peek at Sherman's involvement with the GAR. A note about packing: Check our feedback. We take pride in our excellent packing.

We double-box all fragile items to insure their safe journey through the postal system. We do not mark merchandise values below value or mark items as "gifts" - US and International government regulations prohibit such behavior. The item "1889 Civil War General William Tecumseh Sherman Discusses Plans" is in sale since Tuesday, March 10, 2020.

This item is in the category "Collectibles\Autographs\Military". The seller is "dholz" and is located in Cohoes, New York. This item can be shipped worldwide.
photographuniongeorgerobertulyssesultimategeneralraresignaturearmyprintphotojohngrantsignedoriginalgettysburgservicejames1860santiquememoirsbuttonwilliamcivilmajorframedautographamericanbattleautographedlettershermanconfederategenerals