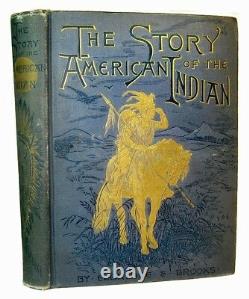 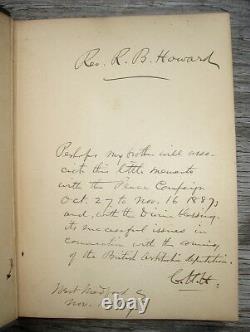 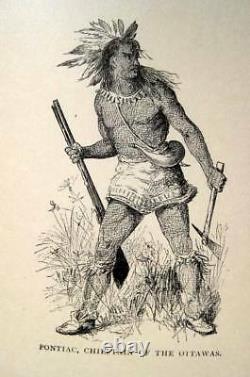 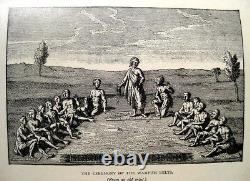 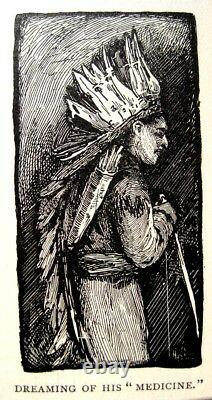 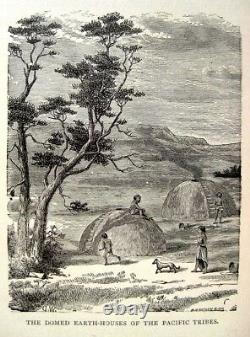 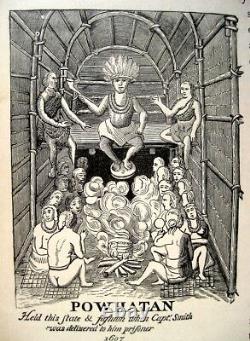 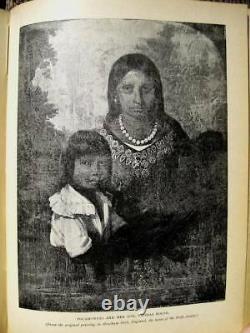 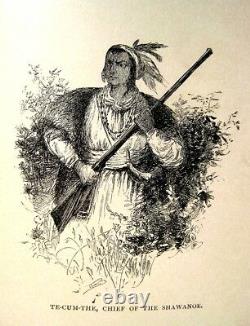 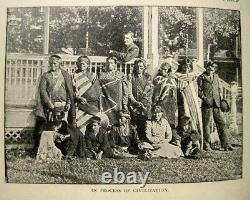 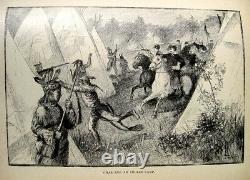 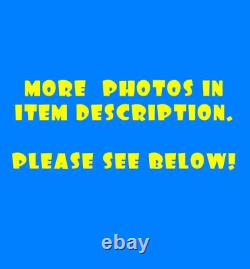 THE STORY OF THE AMERICAN INDIAN His Origin, Development, Decline and Destiny. Published in 1887 by D. 9 x 7 illustrated cloth hardcover with gilt decoration. Exterior as shown in photo, cloth a little darkened.

No torn, loose, or missing pages. Text is clean and complete, occasional smudges. Occasional small round brownish marks near the gutter of several pages, about the size of a pencil eraser. Owner's name inside front cover, gift inscription on first endpaper (see Provenance below).

A great example of this very rare 19th-century Native American title. Provenance: There is an important handwritten inscription on the endpaper. At the top of the page appears the name Rev. Below Reverend Howard's name is an inscription, as follows: Perhaps my brother will associate this little memento with the Peace Campaign Oct.

16 1887; and, with the Divine Blessing, its successful issues in connection with the coming of the British Arbitration deputation. West Medford, November 16, 1887.

General Charles Henry Howard was a Union Brevet Brigadier General in the Civil War. Following the war, General Howard settled in Illinois, worked for the American Missionary Association, became editor of several newspapers and assisted his brother Oliver Howard (founder of Howard University) in founding many colleges and the settling of Native Americans in the West.

He also became involved in the American Peace movement and in 1893 was appointed a delegate to the Chicago Peace Congress by the American Peace Society. General Howard's other brother, Reverend Rowland Bailey Howard, to whom the book is inscribed, was also an official of the American Peace Society, which he served as Secretary. Regarding the Peace Campaign referred to by General Howard in his inscription, in 1887, as part of a joint effort by American and British Quakers, a deputation consisting of several members of British Parliament visited their counterparts along with President Grover Cleveland at Washington to promote "Peace and Arbitration" between Great Britain and the United States. It was an event celebrated by citizens of both countries, especially those in the Peace movement. General Howard's military career alone is sufficient to warrant interest in a book bearing his inscription and initialed signature. He served at the Battle of Bull Run; the Battle of Fair Oaks (in which he was severely wounded by an exploding artillery shell); the June-July 1863 Gettysburg Campaign; and the Atlanta Campaign including the famous March to the Sea. But the fact that part of General Howard's post-war career was devoted to the settlement of Native Americans in the western territories makes the placing of his imprimatur on this copy of THE STORY OF THE AMERICAN INDIAN even more relevant and special. In terms of value, other copies, which have no such esteemed provenance, pale by comparison. Not only is mine the most desirable/collectible copy available anywhere in the world, it is also the best bargain too.

Note on Rarity and Value: I refer you to two of my previous sales of this title/edition. The presence of a handwritten inscription by a Civil War Brigadier General only adds to the value of this book. Here is a rarity in the annals of 19th-century American Indian literature a serious and sympathetic study of Indian history by a white author who describes the mistreatment of the Indian as one of the abuses of the age. In THE STORY OF THE AMERICAN INDIAN, Elbridge S.

Brooks traces the American Indian experience from the colonial shores of New England to the high deserts of the Old West. A fascinating, wide-ranging narrative accompanied by pages and pages of antique illustrations. Elbridge Streeter Brooks was renowned in the 19th century as an American author, editor, and critic.

He made his reputation as an author of numerous works of fiction and nonfiction for younger readers, much of it on historical or patriotic subjects in fact, some of his patriotic works were issued under the auspices of the Sons of the American Revolution and the Daughters of the American Revolution. But in THE STORY OF THE AMERICAN INDIAN, he sheds the mantle of patriotic storyteller and assumes the more discerning and objective viewpoint of the historian. What great personal fortitude must have been required on the part of Mr. Brooks, who earned his livelihood recording the proud saga of his America, to tell the story of the American Indian, so wronged by the United States government and its people.

A period advertisement for THE STORY OF THE AMERICAN INDIAN describes the book thus. The first and only complete and consecutive story of the Red Men of America.

It is sympathetic but not sentimental, practical but not one-sided, picturesque but not romantic. A book for all Americans to read. In the Preface to THE STORY OF THE AMERICAN INDIAN, Brooks explains why he felt it was important for Americans to do some soul-searching in regard to the original proprietors of the land. The popular opinion of the American Indian has for generations been based upon prejudice and ignorance as thoughtless as it is unreasoning and unjust. The red man of America may be no saint, but he is at least a man and should not be condemned unheard. He has his side of the story quite as much as has his white conqueror. Desire, acquisition, superiority, indifference these have been the steps toward the ostracism that has been visited upon the American Indian, denying him justice and opportunity for advancement since the earliest days of white occupation. It is these barriers to progress that have alike created and complicated the vexed Indian problem. This volume does not attempt to state or solve that problem.

It simply seeks to arrange in something like complete and consecutive form the story of the North American Indian as he has existed for generations, and as from supremacy in the land of his fathers he has fallen under the ban of the white civilization that conquered and displaced him. The mistreatment of the Indian, a recent writer declares, is one of the abuses of the age, and one of the reproaches of civilization. It is high time that the abuse and the reproach should give place to something like fairness and moral sense.

If the future of the American Indian is to be brighter and more self-helpful than ever before the credit of this advance is in great measure due to the self-sacrificing exertions of those missionaries of good who have, in spite of heedlessness, and in spite of slur, devoted so much of their lives to the bettering of a misunderstood and unfortunate race. To all such, and to all friends of humanity who, despising injustice, seek to convert public opinion into public conscience, this story of the American Indian is gratefully inscribed.

A new feature in the Indian landscape Hispaniola Colonies at the time of the Revolution Attack on stockade Military tyranny In contact with civilization An episode of the Seminole War The white man wanted the land Fighting the Indians on the Virginia frontier The home of the Indian Types of a fading race Fra Junipero Serro The meeting of the races Charging an Indian camp The renegade of civilization Pocahontas and her son Pontiac, chieftain of the Ottawas Te-cum-the, Chief of the Shawanoe Sa-go-ye-wat-ha the Seneca Ma-ka-tai-me-she-kia-kiah the Sauk Spotted Tail with his wife and daughter His story is a simple one Contact with a higher intelligence A candidate for Hampton School The land of their fathers Pack train leaving a pueblo In process of civilization Darkness Daylight. DONT MISS YOUR OPPORTUNITY TO OWN THIS RARE AND BEAUTIFUL ACCOUNT OF AMERICAS FIRST INHABITANTS, THE AMERICAN INDIANS.

Remember folks, this is an 1887 FIRST EDITION SIGNED BY A CIVIL WAR BRIGADIER GENERAL WHO AIDED IN THE SETTLEMENT OF NATIVE AMERICANS AFTER THE WAR. This book is 131 years old. Please be sure to add me to your List of Favorite Sellers. Don't miss out on any of my latest listings.

NEETMOK BOOKS IS A REGISTERED MEMBER OF EBAYS VERO PROGRAM. When you prepare your listings you generally should use only material text, photographs, etc. And trademarks/names that you created or own yourself or licensed from the owners. Item description text; lists of contents, lists of illustrations/photos; scanned images, etc.

UNAUTHORIZED USE OF ITEM DESCRIPTION TEXT INCLUDING SUMMARIES OF CONTENTS, ILLUSTRATIONS, ETC. PHOTOS OR OTHER PROPRIETARY INTELLECTUAL PROPERTY IS STRICTLY PROHIBITED AND WILL BE REPORTED TO EBAYS VERO DEPARTMENT FOR IMMEDIATE ACTION. The item "1887 AMERICAN INDIAN Tribes WARS Massacres Military SIGNED BY CIVIL WAR GENERAL" is in sale since Monday, February 1, 2021. This item is in the category "Books\Antiquarian & Collectible". The seller is "neetmok" and is located in South Salem, New York.