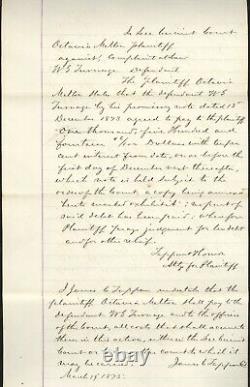 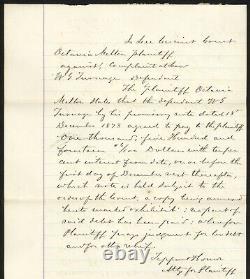 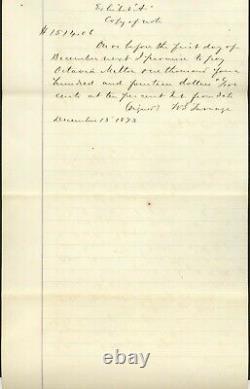 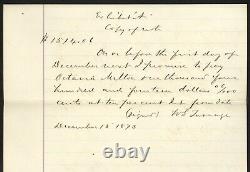 1875 Arkansas Court Document - CS General James C. Offered for your consideration is a post-Civil War court document written and signed at the conclusion by an ex-Confederate general. The legal case was to be heard " In Lee Circuit Court " and involved " Octavia Melton plaintiff against, Complaint at Law W S Turnage Defendant ". The principal text states that The plaintiff Octavia Melton states that the defendant W S Turnage by his promissory note dated 13.

December 1873 agreed to pay to the plaintiff one thousand, five Hundred and fourteen 06/100 Dollars with ten per cent interest from date, on or before the first day of December next thereafter, which note is held subject to the order of the Court, a copy being annexed hereto marked exhibit "A", no part of said debt has been paid; wherefore Plaintiff prays judgement for her debt and for other relief. This statement is signed at the conclusion " Tappan & Horner / Attys for Plaintiff ". This is followed by a slightly shorter statement which reads I James C Tappan undertake that the plaintiff Octavia Melton shall pay to the defendant W S Turnage and to the officers of the Court, all costs that shall accrue to them in this action, either in the Lee Circuit Court or to any other court to which it may be carried.

This statement is signed by " James C Tappan " and is dated " March 19, 1875 ". The back features a written copy of the note, as mentioned in the opening paragraph. It is marked as " Exhibit'A' " and states that " On or before the first day of December next I promise to pay Octavia Melton one thousand four hundred and fourteen dollars 06/100 cents at ten per cent Int from date / (signed) W S Turnage / December 13 1873 ".

It appears that the entire document was written by Tappan, though the last portion seems less crisp and sharp (it is possible that the paper was still attached in a ledger of some type and that it was more difficult to write on the back side of the document due to its position). While not of great historical importance, this is quite a significant amount of text representing this hard fighting Confederate general. Though this piece may not be a candidate for framing, it would certainly make an excellent addition to any Confederate generals autograph collection.

Tappan is not commonly encountered, making this a wonderful opportunity to add him to your set. Don't let this piece grace someone else's collection. Was born in Franklin, Tennessee, on September 9, 1825, though his parents were from Massachusetts. He was educated at Exeter Academy in New Hampshire and graduated from Yale in 1845, after which he studied law in Vicksburg, Mississippi and was admitted to the bar in 1846. Moving to Helena, Arkansas, Tappan served in the Arkansas House of Representatives from 1850 to 1851, after which he served as a circuit court judge.

Soon after the outbreak of the Civil War, Tappan was commissioned colonel of the 13. He led his regiment at the battle of Belmont, and in repeated charges on the infamous "Hornets' Nest" at Shiloh. Tappan was appointed brigadier general on November 5, 1862 and was transferred to the Trans-Mississippi Department, commanding a brigade under General Sterling Price during 1863. He served at Pleasant Hill, Louisiana during the Red River campaign against Union General N. Banks, fought at the battle of Jenkins' Ferry, Arkansas against General Steele, and participated in General Price's final raid into Missouri.

He was again a member of the Arkansas House of Representatives, serving from 1897 through 1900. Tappan died on March 19, 1906 in Helena, Arkansas, and was buried in that city's Maple Hill Cemetery. The presently offered document exhibits signs of period use and subsequent storage, though these are minor considering its age and function. Light toning is present across the entire surface, imparting to the paper a light beige to tan hue.

Slightly darker toning is noted at the edges, though this does not impact the legibility of the document. Several foxing spots are scattered throughout the piece, though these are small and do not seriously affect the eye-appeal of the item. The contrast is sharp, with all words present and legible (providing you can read his writing). The top edge is ragged where it was torn from a pad, while the remaining sides are straight. Minor ink show through is noted, though due to the thickness of the paper, it has not eroded the paper.

Three equally spaced horizontal storage folds are present, though again, due to the type of paper involved, the folds do not threaten the integrity of the document. Measuring approximately 7¾ x 12½ inches, this document could be framed with a period image of Tappan or simply used to represent this Confederate officer.

If you have any questions concerning this item, please ask before purchasing. He has contributed to numerous reference books within the industry, as well as being a co-author of The Comprehensive Catalog and History of Confederate Bonds, 2.

He is an authorized submitter to NGC, PCGS, and PMG, a diamond founding member of Coin Dealers Helping Coin Dealers and a supporter of the Industry Council for Tangible Assets. American Coins and Collectibles can be found at many of the state and local coins shows. This item is in the category "Collectibles\Autographs\Military". The seller is "coin4u" and is located in this country: US.