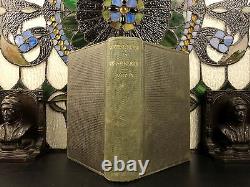 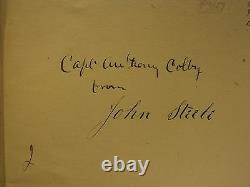 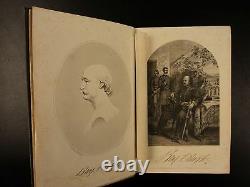 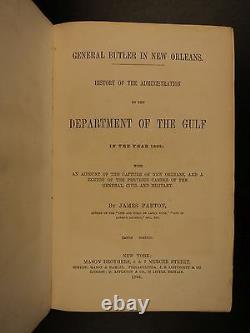 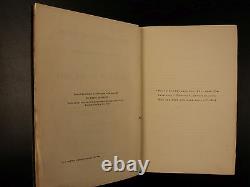 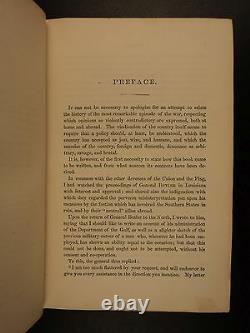 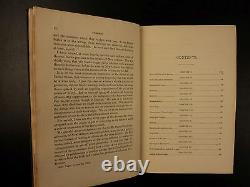 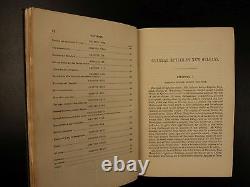 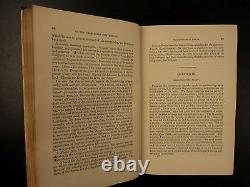 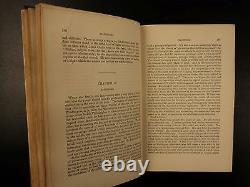 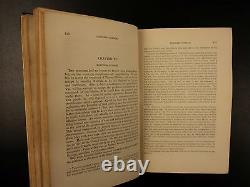 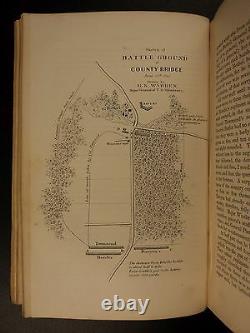 Benjamin Franklin Butler (1818 - 1893), known pejoratively as "Beast" Butler by some contemporaries, was an American lawyer, politician, soldier and businessman from Massachusetts. Born in New Hampshire and raised in Lowell, Massachusetts, Butler is best known as a political major general of the Union Army during the American Civil War, and for his leadership role in the impeachment of President Andrew Johnson.

General Butler in New Orleans : history of the administration of the Department of the Gulf in the year 1862 : with an account of the capture of New Orleans and a sketch of the previous career of the General, civil and military. Given as a gift to Civil War Captain Anthony Colby by John Steel. Wear as seen in photos. Complete with all 661 pages; plus indexes, prefaces, and such. 8in X 6in (20cm x 15cm).

Benjamin Franklin Butler (November 5, 1818 - January 11, 1893), known pejoratively as "Beast" Butler by some contemporaries, was an American lawyer, politician, soldier and businessman from Massachusetts. He was a colorful and often controversial figure on the national stage and in the Massachusetts political scene, where he served one term as Governor. Butler, a successful trial lawyer, served in the Massachusetts legislature as an antiwar Democrat and as an officer in the state militia. Early in the Civil War he joined the Union Army, where he was noted for his lack of military skill, and his controversial command of New Orleans, which brought him wide dislike in the South and the "Beast" epithet. He helped create the legal idea of effectively freeing fugitive slaves by designating them as contraband of war in service of military objectives, which led to a political groundswell in the North which included general emancipation and the end of slavery as official war goals.

His commands were marred by financial and logistical dealings across enemy lines, some of which probably took place with his knowledge and to his financial benefit. Butler was dismissed from the Union Army after his failures in the First Battle of Fort Fisher, but soon won election to the United States House of Representatives from Massachusetts. As a Radical Republican he opposed President Johnson's Reconstruction agenda, and was the House's lead manager in the Johnson impeachment proceedings. As Chairman of the House Committee on Reconstruction, Butler authored the Ku Klux Klan Act of 1871 and coauthored the landmark Civil Rights Act of 1875.

In Massachusetts, Butler was often at odds with more conservative members of the political establishment over matters of both style and substance. Feuds with Republican politicians led to his being denied several nominations for the governorship between 1858 and 1880. Returning to the Democratic fold, he won the governship in the 1882 election with Democratic and Greenback Party support. He ran for President on the Greenback ticket in 1884.

5.2 Business and charitable dealings. 5.3 Governor of Massachusetts and run for President. 6 Later years and legacy. Benjamin Franklin Butler was born in Deerfield, New Hampshire, the sixth and youngest child of John Butler and Charlotte Ellison Butler.

His father served under General Andrew Jackson at the Battle of New Orleans during the War of 1812 and later became a privateer, dying of yellow fever in the West Indies not long after Benjamin was born. [1] He was named after Founding Father Benjamin Franklin. [2] Butler's mother was a devout Baptist who encouraged him to read the Bible and prepare for the ministry. [1] In 1827, at the age of nine, Butler was awarded a scholarship to Phillips Exeter Academy, where he spent one term.

He was described by a schoolmate as "a reckless, impetuous, headstrong, boy", and regularly got into fights. Butler's mother moved the family in 1828 to Lowell, Massachusetts, where she operated a boarding house for workers at the textile mills. He attended the public schools there, from which he was almost expelled for fighting, the principal describing him as a boy who might be led, but could not be driven. [4] He attended Waterville (now Colby) College in pursuit of his mother's wish that he prepare for the ministry, but eventually rebelled against the idea.

In 1836, Butler sought permission to go instead to West Point for a military education, but did not receive one of the few places available. He continued his studies at Waterville, where he sharpened his rhetorical skills in theological discussions, and began to adopt Democratic political views. He graduated in August 1838.

He was admitted to the Massachusetts bar in 1840, and opened a practice in Lowell. After an extended courtship, Butler married Sarah Hildreth, a stage actress and daughter of Dr. Israel Hildreth of Lowell, on May 16, 1844. [7] Butler's business partners included Sarah's brother Fisher, and her brother-in-law, W. Law and early business dealings[edit].

Butler quickly gained a reputation as a dogged criminal defense lawyer who seized on every misstep of his opposition to gain victories for his clients, and also became a specialist in bankruptcy law. [6] His trial work was so successful that it received regular press coverage, and he was able to expand his practice into Boston. [10] Although he generally represented workers in legal actions, he also sometimes represented mill owners. This adoption of both sides of an issue manifested when he became more politically active.

He first attracted general attention by advocating the passage of a law establishing a ten-hour day for laborers, [11] but he also opposed labor strikes over the matter. He instituted a ten-hour work day at the Middlesex Mills. During the debates over the ten-hour day a Whig-supporting Lowell newspaper published a verse suggesting that Butler's father had been hanged for piracy. Butler sued the paper's editor and publisher for that and other allegations that had been printed about himself. Butler blamed the Whig judge, Ebenezer Rockwood Hoar, for the acquittal, inaugurating a feud between the two that would last for decades and significantly color Butler's reputation in the state. Butler, as a Democrat, supported the Compromise of 1850 and regularly spoke out against the abolition of slavery. However, at the state level, he supported the coalition of Democrats and Free Soilers that elected George S.

This garnered him enough support to win election to the state legislature in 1852. [12] His support for Franklin Pierce as president, however, cost him the seat the next year. He was elected a delegate to the 1853 state constitutional convention with strong Catholic support, and was elected to the state senate in 1858, a year dominated by Republican victories in the state. [14] Butler was nominated for governor in 1859 and ran on a pro-slavery, pro-tariff platform; he narrowly lost to incumbent Republican Nathaniel Prentice Banks.

In the 1860 Democratic National Convention at Charleston, South Carolina, Butler initially supported John C. Breckinridge for President, but then shifted his support to Jefferson Davis, believing that only a moderate Southerner could keep the Democratic party from dividing. A conversation he had with Davis prior to the convention convinced him that Davis might be such a man, and he gave him his support before the convention split over slavery. [16] Butler ended up supporting Breckinridge over Douglas against state party instructions, ruining his standing with the state party apparatus. He was nominated for governor in the 1860 election by a Breckinridge splinter of the state party, but trailed far behind other candidates. Although he sympathized with the South, Butler stated "I was always a friend of southern rights but an enemy of southern wrongs" and sought to serve in the Union Army. [18] His military career before the Civil War began as a private in the Lowell militia in 1840. [19] Butler eventually rose to become colonel of a regiment of primarily Irish American men.

In 1855, the nativist Know Nothing Governor Henry J. Gardner disbanded Butler's militia, but Butler was elected brigadier general after the militia was reorganized. In 1857 Secretary of War Jefferson Davis appointed him to the Board of Visitors of West Point.

[20] These positions did not give him any significant military experience. This item is in the category "Books & Magazines\Antiquarian & Collectible". The seller is "schilb_antique_books" and is located in this country: US. This item can be shipped worldwide.