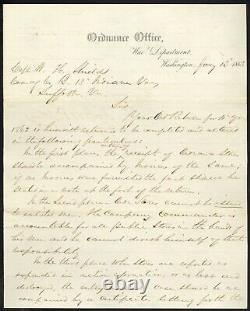 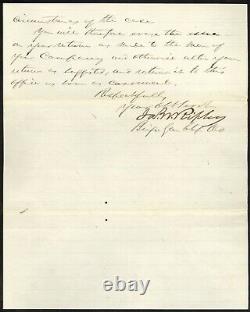 1863 Ordnance Office Document Signed by Brig. Offered for your consideration is a Civil War dated manuscript document, signed at the conclusion by James W. Ripley in his capacity as the chief of the Ordnance Department. Headlined Ordnance Office, / War Department / Washington, Jany 13. 1863 " and addressed to " Capt W.

Indiana Vols / Suffolk, Va. , this manuscript document deals with the proper completion of a government form.

Your Ord Return for 4. The company commander is accountable for all public stores. And cannot divest himself of that responsibility. Continuing, it states " In the third place when stores are reported as expended in action & practice, or as lost and destroyed, the entry in each case should be accompanied by a certificate setting forth the circumstances of the case ".

The concluding paragraph instructs that You will therefore erase the issue on your return as made to the men of your company and otherwise alter your return as suggested, and return it to this office as soon as convenient. The document closes Respectfully / Your Obt. Chf Ord , with the signature being in a different hand from the remainder of the document.

Obviously, Captain Shields failed initially to complete his company return form properly, though presumably he did better on his second attempt. One can only wonder why Shields was not trained in the proper completion of the forms, or was unable to reference a manual for the correct procedure. It is also interesting that Brigadier General Ripley, the head of the department, found it necessary to respond to the issue rather than having someone of a lower rank or position deal with it. An unusual document regarding the proper procedure for completing an ordnance form. Ripley's autograph is not common, especially since he only served as the head of the department for 2½ years (he served in the military for over 55 years). Was born in Windham County, Connecticut, on December 10, 1794. He graduated from the United States Military Academy at West Point in 1814, apparently after only a year of studies, due to the exigencies of the War of 1812. He was commissioned a second lieutenant of artillery, and took part in the defense of Sacketts Harbor. From 1817-18 he served under Andrew Jackson during the Seminole War and in the invasion of Florida as a first lieutenant.

He was advanced to captain in 1825 and transferred to a staff position in 1832. The following year he was placed in charge of the Kennebec Arsenal, remaining in that position until 1842. He subsequently served as superintendent of the Springfield Armory for twelve years, after which transferred to the Pacific Coast as chief of ordnance for the department, with further service as inspector of arsenals. On August 3, 1861, Ripley was commissioned a brigadier general in the Regular Army. While his honesty, devotion to duty, and unbending principles were never questioned, he was inflexible in his belief that advances in military ordnance could cause the department extreme trouble.

This led Ripley to oppose virtually every innovation suggested to the War Department, including breech-loading weapons. This inflexibility ultimately led to Ripley's replacement on September 15, 1863, after which he served as inspector of fortifications on the New England coast. On March 8, 1866, President Andrew Johnson nominated Ripley to the grade of brevet major general, to rank from March 13, 1865.

The United States Senate confirmed the appointment on July 14, 1866. James Wolfe Ripley died in Hartford, Connecticut, on March 16, 1870, with his burial being in Springfield Cemetery in Springfield, Massachusetts. The currently offered document exhibits signs of moderate period use, followed by years of storage.

Toning is present across the entire surface, imparting to the paper an off-white to beige hue. This toning is somewhat darker at the edges and along the folds, though all of the text is still visible. Two horizontal folds are present, slightly weakening the paper, especially at the edges. Two small holes can be seen above and below the lower fold, each slightly affecting one word.

Ripley's signature, however, is sharp and bold. Minor ink corrosion is noted at some of the manuscript additions, though no paper has been lost to this time. This document measures approximately 7¾ x 9¾ inches and was accomplished in period ink on blue lined, white paper. An interesting document that would make a great addition to any Civil War autograph collection. If you have any questions regarding this item, please ask before purchasing.

He has contributed to numerous reference books within the industry, as well as being a co-author of The Comprehensive Catalog and History of Confederate Bonds, 2. He is an authorized submitter to NGC, PCGS, and PMG, a diamond founding member of Coin Dealers Helping Coin Dealers and a supporter of the Industry Council for Tangible Assets. American Coins and Collectibles can be found at many of the state and local coin shows. This item is in the category "Collectibles\Militaria\Civil War (1861-65)\Original Period Items\Documents".

The seller is "coin4u" and is located in this country: US. This item can be shipped to United States.