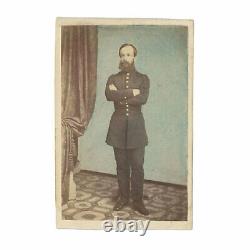 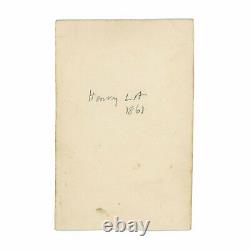 This rare CDV image features General Henry Larcom Abbot as a lieutenant in 1861. The photographer's background is tinted light blue.

Henry Larcom Abbot graduated second in the West Point Class of 1854, joining the Corps of Engineers as a second lieutenant shortly thereafter. In 1855 he participated in Robert Williamson's Pacific Railroad survey of Oregon and California. Abbot's survey work continued as he conducted several studies of the flow of the Mississippi River with Captain Andrew H. At the outbreak of the Civil War, Abbot was assigned to the staff of General Irvin McDowell. Abbot went into the First Battle of Bull Run in July 1861 as chief engineer of General Daniel Tyler's division.

He was seriously wounded in the battle, for which he was brevetted captain for gallant and meritorious services. Recovering from his wound, Captain Abbot participated in the Peninsula Campaign as aide-de-camp to General John G. Barnard, serving at the Siege of Yorktown and the battles of the Seven Days before being taken with Chickahominy Fever. Abbot would remain in this role until the spring of 1864, when he would take command of the Benjamin Butler's siege artillery in the Army of the James. Colonel Abbot soon found himself in charge of all the siege artillery operation against Richmond and Petersburg, in both the Army of the James and the Army of the Potomac, earning a brevet brigadier's commission in the process.

In January 1865, he was pulled away from the Petersburg front when General Alfred Terry requested he accompany his expeditionary force to Fort Fisher on the North Carolina coast. General Abbot commanded Terry's siege artillery during the successful campaign. Returning to Petersburg, Abbot was brevetted major general and participated in the attack on Fort Stedman of March 25 and the breakthrough attack of April 2. Abbot continued on with the Corps of Engineers after the war, creating the Army's Engineer School of Application at Willet's Point, New York, and serving on numerous defense and ordnance boards.

After retiring from the Army, Abbot worked as a civil engineer, most notably as a consultant for the locks of the Panama Canal. Abbot died in Cambridge, Massachusetts, in 1927. Please see my other items for more Civil War CDVs.