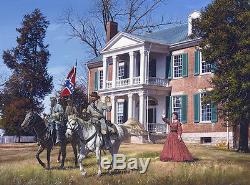 Uring the latter part of the cold days of November 1864, General Hood's Confederate Army of the Tennessee was challenging two retreating Federal Army corps under the command of General John M. With support from Nathan Bedford Forrest in command of the Southern cavalry, Hood's army outmaneuvered Schofield, and at Spring Hill had a chance to cut off the Federals from their retreat to Nashville. Although Confederate forces outnumbered the Federals, Hood was unsure of the enemy's strength and did not give orders for a full-scale engagement.

The Federals slipped past during the night and took refuge behind the fortifications in Franklin. As was his practice to make a thorough personal reconnaissance of the enemy's position, General Forrest arrived on the morning of November 30 at the Carnton plantation. Forrest was greeted by the lady of the house Mrs. Bounding up the stairs of the beautiful home, the general went to the balcony to glass the enemy fortifications. It was clear from this observation post that the enemy was far too strong for an assault at this position.

Mounting his horse, King Phillip, Forrest left the home in haste with his Adjutant General J. General Forrest turned his spurs to the south to find General Hood and report what he had found. At one o'clock in the afternoon Forrest informed Hood that the Federal position could not be taken by a direct assault.

General Hood replied I do not think the Federals will stand strong pressure from the front; the show of force they are making is a feint in order to hold me back from a more vigorous pursuit. " Forrest remarked, "General Hood if you will give me one strong division of infantry with my cavalry, I will agree to flank the Federals from their works within two hours' time. At four o'clock the gray lines got the given sign to move forward in a frontal attack. The rank and file of 18,000 men swept like a wave across the battlefield. The attack was as spectacular and as hopeless as Pickett's charge. For 5 hours Hood sent wave after wave of southern boys to their deaths.

Granbury, John Adams, and Otho F. Strahl were placed in a row on the back porch. Many a brave man's spirit departed that autumn day at Carnton. And many say their spirits have never left.

Print is in new condition. It has not been displayed or framed. Comes with certificate of authenticity in folder. A nice addition to your collection.

The item "General Forrest at Carnton John Paul Strain Military L/E signed Civil War Print" is in sale since Friday, June 10, 2016. This item is in the category "Art\Art Prints".

The seller is "hghobbyandart" and is located in Portsmouth, Virginia. This item can be shipped to United States.