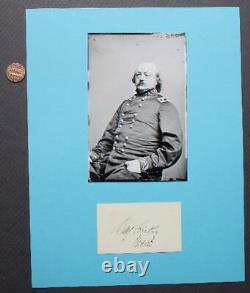 Here's an UNCOMMON 8 1/2" wide by 11" tall AUTOGRAPH & photo of Union Civil War General Benjamin Butler (Died in 1893)- Butler was also a Massachusetts Congressman (See bio below)-The 3 1/2" wide by 2" tall VINTAGE autographed card has a large signature signed Benj. In vintage fountain pen ink on the front and is tipped to a larger blue colored backer with a modern photo of Porter on front. What a great vintage item with a 100% authentic signature!

Benjamin Franklin Butler (November 5, 1818 - January 11, 1893) was an American major general of the Union Army, politician, lawyer and businessman from Massachusetts. Born in New Hampshire and raised in Lowell, Massachusetts, Butler is best known as a political major general of the Union Army during the American Civil War, and for his leadership role in the impeachment of U. He was a colorful and often controversial figure on the national stage and in the Massachusetts political scene and ran several campaigns for governor before his election to that office in 1882.

Butler, a successful trial lawyer, served in the Massachusetts legislature as an antiwar Democrat and as an officer in the state militia. Early in the Civil War he joined the Union Army, where he was noted for his lack of military skill, and his controversial command of New Orleans, which brought him wide dislike in the South and the "Beast" epithet. He helped create the legal idea of effectively freeing fugitive slaves by designating them as contraband of war in service of military objectives, which led to a political groundswell in the North which included general emancipation and the end of slavery as official war goals. His commands were marred by financial and logistical dealings across enemy lines, some of which probably took place with his knowledge and to his financial benefit. Butler was dismissed from the Union Army after his failures in the First Battle of Fort Fisher, but soon won election to the United States House of Representatives from Massachusetts.

As a Radical Republican he opposed President Johnson's Reconstruction agenda, and was the House's lead manager in the Johnson impeachment trial proceedings. As Chairman of the House Committee on Reconstruction, Butler authored the Ku Klux Klan Act of 1871 and coauthored the landmark Civil Rights Act of 1875. In Massachusetts, Butler was often at odds with more conservative members of the political establishment over matters of both style and substance. Feuds with Republican politicians led to his being denied several nominations for the governorship between 1858 and 1880.

Returning to the Democratic fold, he won the governorship in the 1882 election with Democratic and Greenback Party support. He ran for president on the Greenback ticket in 1884. However, if the items are heavy or require special packing / tracking, the postal rates might not be significantly reduced. We pack every item professionally using new packing materials and appropriate mailing supplies. We send all items via US Postal Service.

I think you'll find that we're quite fair. I try and place a penny in every photo to help judge the size of the item, obviously it is there for size comparison and is not included with the item. The standard sized Lincoln head penny in the photograph is there for size comparison ONLY and is not included in the package. We're just trying to help you figure out how big the item is. We try and always be as accurate as we can in the item. Description and will gladly answer any question about item size & description when needed. Postal service and is never refundable. Many of the items are VINTAGE and although they are in very fine condition, they may not function as well as when they were made decades ago. In other words, if you intend on using a 50+ year old letter opener and it breaks, don't get mad at us. It may be hard to believe, but we have received a couple negatives because people broke vintage items while trying to use them. We comb the antique stores & malls as well as Antique shows & flea markets from Coast-to-coast in an effort to try and find that special addition to your collection. We travel hundreds of miles and wake up with the sun in search of these items. We truly have a love for our hobby / business. We generally charge the same postal rate that the US Post Office charges us. We'll respect you, but please respect us as well. Auctiva offers Free Image Hosting and Editing.

This item is in the category "Collectibles\Autographs\Military". The seller is "ghost-train65" and is located in this country: US. This item can be shipped to United States.