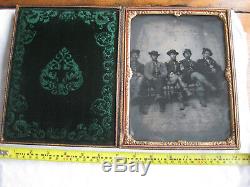 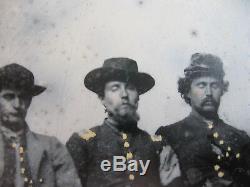 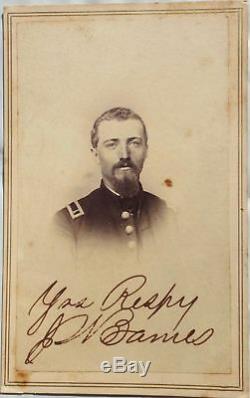 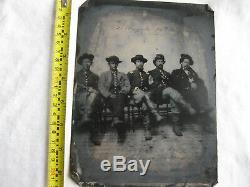 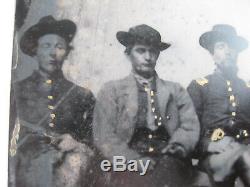 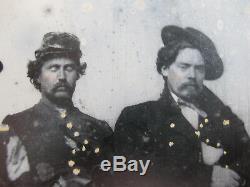 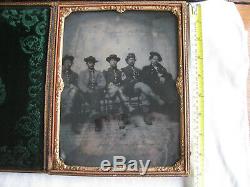 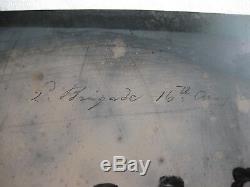 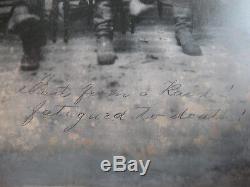 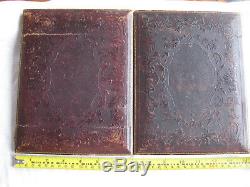 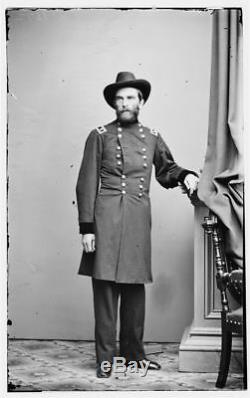 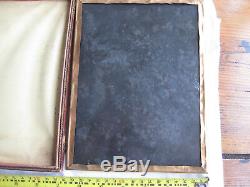 Civil War Full Plate Tintype of 2nd Brigade 16th Army Corps General Dodge's Staff. This plate was probably taken in Chattanooga, Battle field full plate tintypes were not wasted on the average soldier and the writing on the tintype is period. In December of 1862 the 16th Army Corps was commanded by Maj Gen.

Hurlbut with Dodge Leading the Second Division of that corps. I think the photographer mislabeled the photo of Dodges Staff meaning to write 2nd Division and not 2nd Brigade. In or shortly before January of 1864 Dodge was promoted to Maj General and given the 16th with the 2nd Division going to Brig General Thomas Sweeney. So I believe my Full plate was taken during the year of 1863.

DODGE AND STAFF AT CORINTH, MISS. IN THE SPRING OF 1862. Model of fortified town on the table.

Howard, Judge Advocate; Lieutenant J. Hogan, Ordnance Officer; Major W. Marsh, Medical Director; Captain B. Captain Henry Horn, Chief of Grand Guards. I have provided two single images one of Dodge from the Library of Congress the other of J.

W Barnes Dodge's ADC who is sitting in the middle of the photo. They are for reference only to help you in your identification I appreciate the help from a fellow E-bayer that provided the CDV image of J. Barnes and helped positively identify the officer sitting in the middle of the tintype. I have more information about the tintype and pictures of General Dodge and his staff that will be provided to the purchaser of this great full plate. You will find that the other members of Dodge's staff that are sitting with Barnes and are identifiable in the other staff pictures which I can not provide in this forum.

I have downloaded them from various sites throughout the years. Please do an extensive research on this photo and compare to the other staff pictures you may find. Please remember he was with different members of his staff throughout his campaign and the two different staff pictures I know of show that they are in the full plate Tintype. After retiring and downsizing I no longer have the available area to display them properly and I wish to pass these items on to someone who may have the room to display and appreciate them fully. In spring 1863, Union major general Grenville M. Dodge led a Union expedition to Alabama. Dodge, who commanded part of Grants Army of the Tennessee, led his forces on an expedition into Alabama.

The purpose of Dodges expedition was to protect Grants lines of communication, destroy Confederate railroads and supplies, and take control of Tuscumbia, Alabama. Rosecrans was to take control of Florence, Alabama.

Dodge had organized the Fourth Iowa Infantry at Council Bluffs, and he also recruited a company of artillery known as the Dodge Battery. Within two weeks time, Colonel Dodge was leading his command against the rebels in northern Missouri. He was first assigned to Rolla, Missouri, where he was placed in command of the post; in the southwest campaign, he commanded the First Brigade, Fourth Division of that army.

His regiment was the first to enter the city of Springfield, Missouri, and at the Battle of Pea Ridge in March 1862, his brigade saved Curtis' army from disaster. At Pea Ridge, Dodge had three horses killed, while the fourth was wounded under him. He was under fire for three days and remained at his post until the battle was brought to a close, and lost one-third of his entire command. Every field officer was either killed or wounded, for Dodge would not retreat.

His calmness in the face of danger, his understanding of the situation, and his indomitable courage constituted the strong elements in the achievement of that victory. Dodge suffered two wounds during the Missouri campaigns of 1861 and 1862. He received a thigh wound when the pistol in his flapping coat struck the saddle and discharged, explained Stanley P. The second injury occurred at Pea Ridge, when an enemy shell severed a tree branch, striking Dodge in the head. For his service in Missouri, Colonel Dodge was promoted to brigadier general, and after he had recovered from his wounds, he was assigned to duty at Columbus, Kentucky, in command of the Central Division, Army of the Tennessee, where his previous experience as a railroad builder was brought into requisition in the reconstruction of the Mobile and Ohio Railroad, which had been destroyed by the rebels and was needed to carry supplies to the army. In November 1862, General Ulysses S. Grant appointed General Dodge to command of the Second Division, Army of the Tennessee. Dodge and his troops aided Generals Grant and William Tecumseh Sherman by rapidly repairing and rebuilding the railroads, bridges, and telegraph lines destroyed by the Confederates. While rebuilding the 150-mile Mobile and Ohio Railroad, the troops had to contend with the Confederates and guerillas ripping up track, wrecking bridges, and killing pickets. Dodge partially solved the problem by building two-story blockhouses near the bridges. Dodge also organized and ran an effective espionage network. He devised a method to estimate the size of an enemy force based on the space it occupied on a road. His estimates of the size and location of the enemy enabled Union officers to make shrewd strategic decisions. Women and blacks were among Dodge's spies. He organized the First Tennessee Cavalry, First Alabama Colored Infantry Regiment, and the First Alabama Cavalry Regiment as agents, and armed a detachment to guard runaway slaves. Because Southern pickets seldom stopped and questioned blacks, they made good messengers. Because of the intelligence his spies gave Grant at Vicksburg in 1863, Dodge was given command of the large left wing of the Sixteenth Corps of the Army of the Tennessee. During General Sherman's Atlanta Campaign of 1864, Dodge commanded the XVI Army Corps.

His Iowa troops held the right flank for General Sherman's army, earning Dodge the rank of major general. On August 19, 1864, during the siege of Atlanta, Dodge received a wound that was so serious the New York newspapers reported him dead. While Dodge was looking through an eyehole in the Union breastworks, a Confederate sharpshooter spotted him and shot him in the head.

But the injury was not as serious as first thought; he was given a thirty-day leave, and was brought to Council Bluffs to recover. In November 1864, he was made commander of the Department of the Missouri.

Dodge established his headquarters at Fort Leavenworth, Kansas, in 1865, and his family joined him. Another daughter, Anne, was born in Kansas in March 1866. As the Civil War was coming to a close, Dodge's command was expanded to include the Departments of Kansas, Nebraska, Colorado, and Utah. Dodge was assigned to clear the plains of Indians, who were murdering settlers. Dodge practiced a tough policy towards the Native Americans through psychological warfare, brutal exterminations, and worthless treaties.

Dodge ordered a punitive campaign to quell these raids, which came to be known as the Powder River Expedition. When Dodge called for volunteer troops to fight the Indians, most men said the war was over and declined the service. Five regiments of "Reconstructed Rebs" provided the necessary forces. They were made up of Southern war prisoners willing to fight Indians for their freedom. Before the Indians were eradicated, President Johnson instituted leniency. During the 1865 campaign in the Black Hills, while escaping from a war-party, Dodge realized he had found a pass for the Union Pacific Railroad, west of the Platte River. As chief engineer, Dodge was placed in charge of selecting and surveying the 1186-mile route west to Promontory Point, Utah.

He was not in charge of construction of the transcontinental railroad or its workers, as he liked people to think. Dodge had been hired by Thomas Clark Durant, who was the main investor in the Union Pacific Railroad and head contractor on the project. Durant was also defrauding the company and manipulating the route to suit his own landholdings.

Although Durant had once promised Dodge stock in his secret scam, the Crédit Mobilier, it had never materialized. Dodge fled to Texas to avoid testifying in the inquiry. Federal agents were sent out, but they could not manage to find him. Peter Dey, whom Dodge had once replaced as engineer, told Congress that Dodge was a man of wonderful resources, and can live in Texas all winter, out of doors, if he wants to, where none of your marshals can go, and if he don't want to come he will not come.

Dodge was elected to Congress from Iowa's 5th District. He learned the art of lobbying, and for the rest of his life did so on behalf of veterans and the railroads.

Finding politics not to his liking, Dodge did not seek another term. The Union Pacific Railroad was well underway, and he devoted four years of his life to building his "greatest accomplishment, " as he referred to the railroad.

Please view Photo's to make your own determination of condition. Please view my other civil war items for sale.

The item "Civil War Full Plate Tintype of 2nd Brigade 16th Army General Dodge's Staff" is in sale since Thursday, January 18, 2018. This item is in the category "Collectibles\Militaria\Civil War (1861-65)\Original Period Items\Photographs". The seller is "ke1sean" and is located in Sparta, North Carolina.