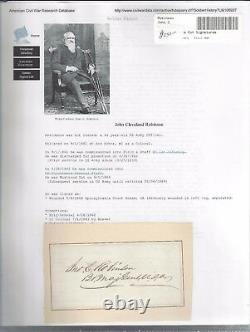 Civil War Union Major General, Congressional Medal of Honor Recipient. He was born in Binghamton, New York, and received a private education at Oxford Academy, New York, ; he then entered West Point on July 1, 1835. Dismissed from the school during his third year, in a disciplinary dispute on March 14, 1838, he briefly studied law but wrangled an appointment to the Regular Army, joining the 5th United States Infantry as a 2nd Lieutenant on October 27, 1839. He served through the Mexican War in the Quartermaster's Department and saw action at Palo Alto, Resaca de la Palma, Monterrey, and Mexico City. After duty in Texas, promotion to Captain in 1850, and service in the Seminole Wars and the 1857 Utah Expedition, he assumed command of Fort McHenry, in Baltimore, Maryland. With a force of 60 men inside the fort, he made a show of force against Maryland secessionists during the Baltimore Riots, on April 19, 1861, preventing the fort's seizure. In September 1861 he was sent on recruiting duty in the Midwest, raised the 1st Michigan Volunteers, and was elected its Colonel. On railroad guard duty in Maryland until March 1862, he earned appointment to Brigadier General on April 28, 1862, and joined Major General George B.

McClellan's army for the Peninsula Campaign as a member of the III Corps. Leading the 1st Brigade, 1st Division, he fought through Second Bull Run and Fredericksburg, then assumed leadership of the 2nd Division, I Corps for the Battle of Chancellorsville, and on July 1, 1863, with around 2,500 men, held off more than twice that number of Confederates for 4 hours at Gettysburg. His division formed the extension of the Union Right on the famed Oak Knoll.

It fought heroically, sustained great casualties and retreated in good order after the collapse of the XI Corps. In fact the two corps (the I and the XI) had never linked up and had a half mile gap. For his tenacious defense he was brevetted Lieutenant Colonel in the Regulars. Later commanding the 2nd Division, V Corps, at Laurel Hill, Virginia, on May 8, 1864, he followed orders to lead his scattered force against massed Confederates preparing for the Battle of Spotsylvania. His charge was repulsed, and, severely wounded in the left knee, he lost his leg to amputation, thus costing him field command.

Elected Lieutenant Governor of New York in 1872, he served until 1874, and became active in the leadership of the Society of the Army of the Potomac and the Grand Army of the Republic until overtaken by blindness in 1893. On March 28, 1894, he received the Medal of Honor for his actions at Laurel Hill. His citation read: Placed himself at the head of the leading brigade in a charge upon the enemy's breastworks; was severely wounded. In April 1917 his valiant stand on the first day of fighting at Gettysburg was commemorated with a statue on the battlefield. Visitors today can find it at the junction of Doubleday and Robinson Large size 2.5 by 7. This item is in the category "Collectibles\Autographs\Military".