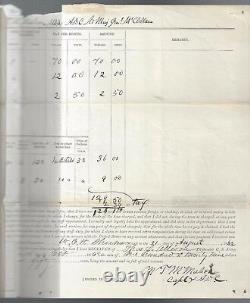 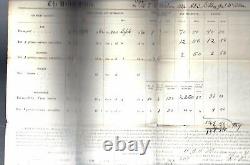 Early War document autographed by future Medal of Honor winner Captain Martin T McMahon dated 8/31/62 for costs of servants while on the staff of General George McClellan just before the battle of Antietam. McMahon would go on to join John Sedgwick's Staff in the VI Corps. Martin Thomas McMahon (March 21, 1838 April 21, 1906) was an American jurist and a Union Army officer during the American Civil War. He was awarded the United States military's highest decoration, the Medal of Honor, for his actions at the Battle of White Oak Swamp. After the war, he held various legal and judicial positions in the state of New York.

He briefly served as the Minister Resident to Paraguay and was a New York State Senator for four years. McMahon was born in La Prairie, Quebec, Canada, [1] to a family of recent immigrants from Waterford, Ireland. The family moved to the United States when McMahon was an infant and settled in New York. John's College, Fordham, in 1855 and then studied law in Buffalo, [2] receiving his Master's degree in 1857. [1] After his schooling, he traveled west and worked as a special agent for the post office on the Pacific coast.

McMahon remained with the Army of the Potomac throughout the war, eventually rising to the rank of brevet major general. [2] Decades after the end of the conflict, in 1891, he was awarded the Medal of Honor for his actions at the Battle of White Oak Swamp on June 30, 1862.

His official citation reads: Under fire of the enemy, successfully destroyed a valuable train that had been abandoned and prevented it from falling into the hands of the enemy. [3] McMahon's two older brothers were also officers in the war, both with the 164th New York Volunteer Infantry.

John Eugene McMahon (18341863) commanded the 164th before being injured; he later died of these injuries. Middle brother James Power McMahon (18361864) took over the regiment and led it until his death at the Battle of Cold Harbor.

In 1866, after the end of the war, McMahon resigned his Army commission[2] and received a Doctor of Laws degree from St. [1] He was New York City's corporation counsel for two years before becoming the United States minister to Paraguay, a position he held from 1868 to 1869. [2] After returning to the U. During this time he became connected with the National Soldiers' Home, of which he would serve as president for several years.

You are here: Home > Brevet Major-General Martin T. McMahon was born in Canada in 1838.

His father and uncle, who were temporarily residing there, had been connected with the Canadian rebellion of that year, and were obliged to leave suddenly for the United States for fear of arrest. General McMahon was graduated at-St.

John's College, Fordham, New York, at the age of seventeen. He subsequently received from the same college the degree of LL. He studied law in Buffalo in the office of Hon. Eli Cook, at that time mayor of the city.

While still under age he was appointed to succeed his elder brother as corresponding clerk in the appointment office of the Post-Office Department at Washington, and in the last year of Buchanan's administration he was sent as special agent of the Post-Office Department for the Pacific coast to California, where he remained until the outbreak of the war. Upon the first call for troops he entered the service, and was elected captain of the first company of cavalry organized on the Pacific coast. He was not mustered in, however, as orders had been received from Washington to retain the California volunteers within that State to relieve the regular troops on duty there. McMahon thereupon resigned his command, and shortly afterwards was appointed captain in the U.

Army and additional aide-de-camp on the staff of Major-General George B. McClellan, who had just been called to Washington.

He served with the Army of the Potomac from the beginning to the end, and was present in every engagement in which that army took part. During the Seven Days' fight on the Peninsula he was assigned, at his own request, to the staff of Major-General William B. Franklin, commanding the Sixth Army Corps. He was subsequently promoted to be major and aide-de-camp, and afterwards lieutenant-colonel and assistant adjutant-general of the Left Grand Division, Army of the Potomac. When that division was discontinued after Burnside's failure at Fredericksburg, McMahon was reassigned as adjutant-general to the Sixth Army Corps, and served as chief of staff to General Sedgwick until that officer's death at Spottsylvania.

He was continued in the same capacity under General Wright until the end of 1864, when he was assigned to temporary duty in New York, on the staff of Major-General Dix, commanding the Department of the East. Two elder brothers of General McMahon, who were successively colonels of the One Hundred and Sixty-fourth New York Volunteers, died in the service. The eldest brother, Colonel John E. Was the first colonel of the regiment, and upon his death the second brother, James P.

McMahon, succeeded him and was killed at Cold Harbor. He was the only one of his corps who reached the enemy's works and placed his flag there, which fell inside their lines and was captured. General McMahon has held several important positions in civil life. He was corporation attorney of the city of New York in 1866-67, U. Marshal for the Southern District of New York during President Cleveland's administration; was elected to the Assembly in 1890, carrying a Republican district which had never before elected a Democrat. The following year he made a similar contest for the State Senate, and again carried a district which had always been represented by a Republican.

He was chairman of the Committee on General Laws, and of that on Military Affairs in the Senate. He received the Congressional medal of honor for distinguished bravery at the battle of White Oak Swamp. The incident for which it was conferred was the burning of a pontoon train which had been abandoned between the lines. McMahon volunteered to destroy it, and did so, after saving one of the wagons, to which he succeeded in attaching some straggling mules that were wandering up and down between the lines of the two armies. This wagon was the instrument-wagon of the train, and was extremely valuable.

General McMahon is a lawyer in good practice in the city of New York. He is also one of the managers of the National Home for Disabled Volunteer Soldiers, and was three times elected by Congress to that important position. During his military service he was brevetted four times, and several times mentioned in orders for gallant and meritorious service. The item "Civil War Era future General Martin T McMahoh Autographed Document MOH" is in sale since Thursday, October 19, 2017. This item is in the category "Collectibles\Autographs\Military".